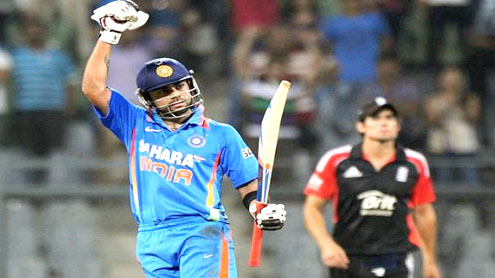 World champions India stayed on course for a clean sweep of the one-day series against England with a six-wicket win in the fourth match here on Sunday.

Virat Kohli and Suresh Raina hit half-centuries as the hosts made light of a bad start to overhaul England’s modest 220 all out in the 41st over of their innings in the day-night match.Raina smashed 80 off 62 balls and Kohli made an unbeaten 86, the pair having put on 131 for the fourth wicket after India were reduced to 46-3 in the 14th over.Another win in Tuesday’s final one-dayer at the Eden Gardens in Kolkata will give Mahendra Singh Dhoni’s men a resounding 5-0 series win over Alastair Cook’s struggling tourists.

The emphatic victory was set up by the bowlers who shot England out for a modest total in India’s first match at the Wankhede stadium since winning the World Cup final against Sri Lanka in April.ff-spinner Ravichandran Ashwin shattered the top order with 3-38, before 21-year-old debutant fast bowler Varun Aaron polished off the tail with 3-24 on a slow wicket.Tim Bresnan top-scored with 45 and Kevin Pietersen made 41, but five England batsmen failed to reach double-figures after Cook won the toss and elected to bat.

‘We want to finish the series on a high, but we will have to play good cricket again in Kolkata to win,’ Dhoni said, when asked if a 5-0 scoreline was on his mind.‘Overall the team has performed very well in the series. With so many young players in the side the fielding has been good. Varun bowled quick and that’s one thing we are looking for.’Cook rued his team’s low total that cost England the match.‘We fell short again,’ he said. ‘A lot of our top order got in. It’s been quite similar all through this tour. In Indian conditions, once you get in, you’ve got to get a 70, 80, 90.

‘We kept losing wickets, and 220 was not enough. I can’t fault the desire and commitment from the lads in training, but we’re just not performing.‘We’ve got one more left and we’re desperate to try and get a win,’ the England captain said.The tourists went into the match with with a new-look attack that included 21-year-old Durham leg-spinner Scott Borthwick and 22-year-old Surrey fast bowler Stuart Meaker.

The two youngsters, who replaced Graeme Swann and Jade Dernbach, went for a combined tally of 104 runs in 17 overs.Fast bowler Steven Finn dealt two early blows when he bowled Parthiv Patel and Gautam Gambhir in successive overs to leave India on 21-2 by the eighth over.It soon became 46-3 when Meaker had Ajinkya Rahane caught behind, but Kohli and Raina settled in to deny England another quick breakthrough. – Khaleejnews