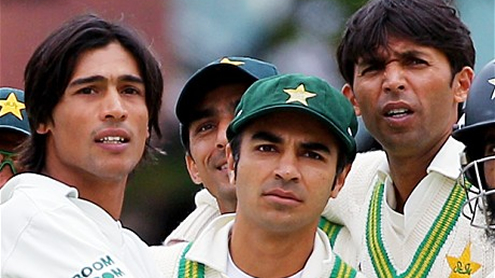 A former Pakistan cricket captain and his two leading fast bowlers engaged in “rampant corruption” after accepting bribes to bowl deliberate no-balls from a gambling conman, a court heard. Salman Butt, 26, and bowlers Mohammad Asif, 28, and Mohammad Amir, 19, conspired with the UK-based sports agent Mazhar Majeed, 36, to fix parts of a Test during last year’s tour of England. The four men were motivated by greed to “contaminate” a match watched by millions of people and “betray” their team, the Pakistan Cricket Board and the sport itself, London’s Southwark Crown Court was told.

The case centres on the Test match between Pakistan and England at Lord’s Cricket Ground in London from August 26 to 29 last year. The four men are accused of “spot fixing”, where parts of a match are illegally rigged, for example by timing the delivery of a deliberate wide or no-ball, but the overall outcome of the game is not manipulated. The allegations stem from an investigation by Mazher Mahmood, former undercover reporter for the now-defunct News of the World. – telegraph

This author has not added a biography. Meanwhile Top has contributed 2456 posts. Click here to view them.