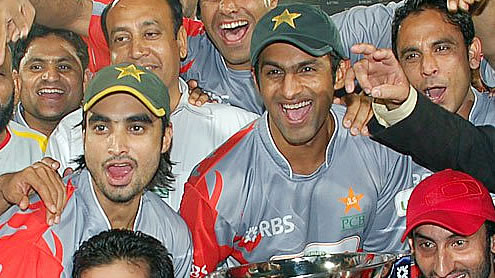 KARACHI: Sialkot Stallions became the twenty20 champions for the sixth time when they defeated Rawalpindi Rams by ten runs after an interesting contest in the final of the Faysal Bank National Twenty20 Cup 2011 here at the National Stadium on Sunday. Chasing 181 runs, Rawalpindi Rams were looking set for win when they needed 19 runs from 12 balls with five wickets in hand but the Stallions captured three more wickets giving away only eight runs.

For the Rams, only opener Naved Malik played a brave innings of 67 runs off 47 balls, hitting three sixes and six fours. The second highest scorer was his opening partner Awais Zia (32) whereas no other batsman could make more than 14 runs. For the Stallions, spinners Raza Hasan and Abdur Rehman got two wickets each for eleven and 27 runs, respectively. Earlier, Sialkot Stallions piled up 180-6 in the allotted 20 overs after their captain Shoaib Malik won the toss and decided to bat. The main scorers of the Stallions were Qaiser Abbas (44), Shoaib Malik (43), Shakeel Abbas (39) and Shahid Yousuf (32). Off-break bowler Awais Zia claimed two wickets for 17 runs for the Rams. – Geo