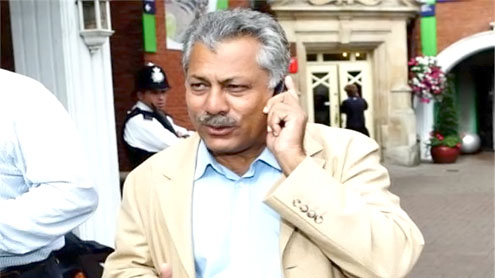 ISLAMABAD: Asian Bradman, Zaheer Abbas Monday said that a stadium should be built at Wagha border for Pakistan-India series to be played there adding that the arena should be constructed at the equator of the border.Talking to APP, former skipper said, the venue should be half in Pakistani and half in Indian territories. He was of the view that both countries should prepare for the bilateral series.Abbas, who made his Test debut in 1969, said besides cricket a multi-sports centre should also be made at the same venue in order to play various sports among the two countries.“See it’s just a personal opinion as both the countries can come to a mid point at Wagha border and play games against each other. In this way we do not have to obtain NoCs or there would be any fear that we are going to India and vice-versa.”In this way, he added, fans from both the countries can witness matches sitting on their own ‘homeground’.

“The Indian crowd can sit on their half and the Pakistani at theirs.” Abbas, who is fondly called ‘Run-Machine’, said both the countries are ready to play against each other  and “it’s my dream to see the Pakistan-India series happen as it’s been so long since both the countries have meet in any bilateral series.”Commenting on the team’s poor batting, he said they badly need a batting coach.Abbas said he met Pakistan manager Intikhab Alam earlier this month and told him that team badly needs a batting coach.“Alam told me that he does not want to keep many people along with him.” Abbas, who has also worked as manager of the national team said. “I also passed this suggestion to the Pakistan Cricket Board (PCB) chairman, Ijaz Butt but he didn’t reply.”He said now Javed Miandad has refused to take over the assignment of batting coach, but even then, the PCB should not look for a foreign coach.“The foreign coach, if hired, will have language problems with the boys and he won’t be able to properly deliver his best to the team.”He said because of a foreign coach we might have to hire an interpreter resulting in wastage of a lot of time.

He said the batting coach should be from Pakistan who can understand the team and can teach them well.He said we have got a lot of talented coaches in Pakistan, the PCB just have to dig them out.“I believe that it is the best time to hire a Pakistani coach as he can help the boys in all possible means.”He felt that at a time when the team comes back from foreign tour and there won’t be any series to play, the team should practice for two-three months continuously giving full attention on their fielding which he thinks is not up to the mark at all.He said, “We should now give as much chance to our youth as possible so that they can be transformed into a good squad for the next World Cup.“We have a lot of talented young players but we need to trust them and give them hope.”He said our batsman always play on the back foot through which we lose many wickets at a time.“Our batsman should get training on playing at the front foot will help our boys improve their batting prowess.” Abbas, who retired from international cricket in 1985, said: “Pakistan team is much tougher than West Indians as they lack the services of Chris Gayle, Shivnarine Chanderpaul and Ramnaresh Sarwan.He felt that now Pakistan skipper Shahid Afridi needs to perform with the bat also as a decent score is due on him for a long time. – APP