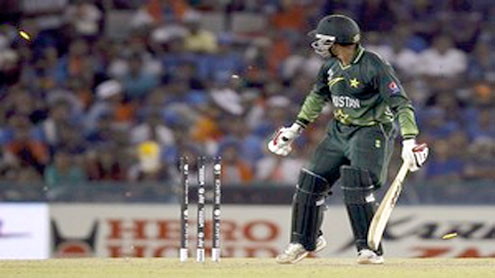 LAHORE: Out of form all rounder Abdul Razzaq and wicket keeper Kamran Akmal were dropped from Pakistan’s ODI and Twenty20 squad which has a few young faces to display their talent in the upcoming tour of West Indies.Veteran batsman Younis Khan and medium pacer Umar Gul have not been selected on the pretext of being “ rested “.Shahid Afridi will lead the squad whose other members are, Mohammad Hafeez, Ahmed Shehzad, Taufeeq Umar, Usman Salahuddin, Misbah-ul-Haq, Asad Shafiq, Umar Akmal, Abdur Rehman, Saeed Ajmal, Tanvir Ahmed, Wahab Riaz, Junaid Khan, Hammad Azam, Aizaz Cheema and Mohammad Salman (wk)Reserves: Rameez Raja (jr), Sadaf Hussain, Asif Zakir, Sohail Khan, Zulifqar Babar.The tour begins with a warm-up game from April 18, while the only Twenty20 will be played on April 21 in St Lucia. The five-match ODI series will begin on April 23, and the Test leg of the tour will commence on May 12.

“ It is a balanced squad as we have tried to get experience with youth keeping in view our future needs “,said the chief selector, Mohsin Hasan Khan on Wednesday.He said the Test squad will be named later and hopefully it will have Younis and Gul to strengthen the team for the longest version of the game.“ Both of them had asked for a rest from the limited overs version of the tour which was granted “,he added.Mohammad Salman gets the gloves from Kamran whose below par keeping remained the main worry of the team during the World Cup.Salman has 103 first-class games to his credit but at the age of 29 he seems slightly old to make his debut at international level.With his selection the inclusion of another Akmal bother, Adnan in the squad died down.But there is strong likelihood that Adnan may win a place in the test squad to play West Indies as the selectors want to give Salman a chance to fill the void.

Though Ahmad Shahzad disappointed in the role of opener in the Cup and was subsequently dropped in important matches of the grand event,was given another life line on the recommendations of the captain Afridi who believes that the young player has a lot of talent yet to show.“ The tour will be tough but we are giving youngsters a chance to build the team for future commitments ‘,said the chief selector. Hammad Azam,who was a part of Pakistan’s last U-19 World Cup team, has been included as a new all rounder because selectors and the team management is in favour of grooming a young all rounder rather having faith on a tired Razzaq.“ The selection of new players have been made based on their showing in the domestic cricket and they have put up brilliance to get our attention “,said Mohsin.Left-hand opening batsman Taufeeq Umar is another surprise inclusion in the shorter format.Pace bowler Aizaz Cheema,talented batsman Salahuddin and pacer Junaid Khan are all set boost the team in their respective departments. – APP