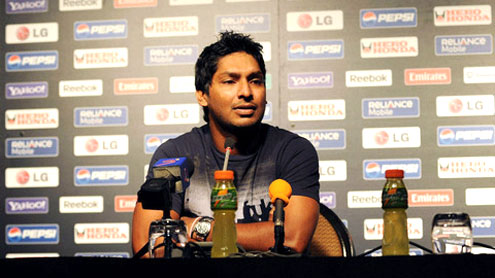 Kumar Sangakkara has stood down as captain of Sri Lanka’s limited overs team after their World Cup final loss to India on Saturday but plans to carry on as the interim Test skipper until a replacement is found.The 33-year-old led by example at the World Cup, finishing as the third highest scorer with 465 runs behind teammate Tillakaratne Dilshan (500), who many pundits believe may succeed him as the next captain, and Indian Sachin Tendulkar (482).“I would like to announce that after careful consideration I have concluded that it is in the best long-term interests of the team that I step down now as national captain,” Sangakkara said in a statement on the Sri Lanka team website (www.srilankacricket.lk) on Tuesday. “I met the selectors on Monday and I explained my reasons for my decision and I assured them of my fullest support in helping our new captain settle into the leadership.

“I have offered to continue as the Test captain for the forthcoming series with England and possibly Australia if the selectors believe this would help the new captain and aid the transition.”The left-hander, however, dismissed any talk of retirement.“I have no plans for retirement from international cricket at this stage and subject to form and fitness I would like to be considered for selection in all three formats of the game for the foreseeable future,” the wicketkeeper-batsman said. Sangakkara took over the captaincy reins from Mahela Jayawardene in 2009 and under him, Sri Lanka won five of their 14 Test matches and 27 out of 45 one-day internationals.Sangakkara said he made the decision prior to the World Cup jointly hosted by Sri Lanka, India and Bangladesh.