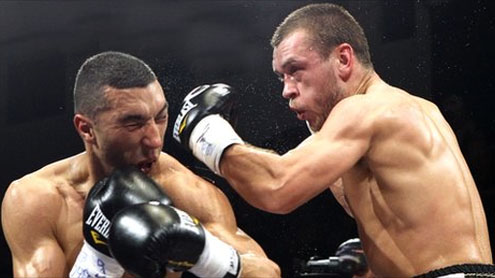 Manchester boxer John Murray retained his European lightweight title on a unanimous decision in a gruelling bout with Karim El Ouazghari at York Hall.The well-conditioned Spaniard proved resilient and troubled a sluggish Murray with left jabs and body shots.But Murray’s work rate rarely waned and by rounds nine and 10 he was well on top against his tiring opponent, 31.El Ouazghari took a count in the 11th and Murray comfortably got the verdict in the end – 116-110 117-111 115-112.The victory extended 25-year-old Murray’s unbeaten record to 31 fights – the best sequence by any British boxer.However, the laboured manner of Saturday night’s performance in east London has raised question marks about Murray’s readiness for a world title shot, and would have encouraged West Ham fighter Kevin Mitchell – who watched from the front row having recently admitted he is keen to take on Murray in a bid to return to the top of the division.Ranked a lowly 20th by the European Boxing Union, El Ouazghari was not expected to provide such a stern test.

But the challenger acquitted himself well from the first bell against an apparently flat Murray, who was constantly susceptible to left jabs and body shots as he attempted to get close to impose himself on his opponent.The Spanish champion, too, was capable too of absorbing what Murray threw at him – predominantly work on the body – as the fight quickly developed into an unsightly, if intriguing, brawl.Murray’s honest, if sloppy, endeavour began to reap rewards by the seventh – El Ouazghari hit the canvas after losing his balance following a quick-fire exchange, but the referee correctly did not treat it as a knockdown.Murray dominated the next two rounds but was lucky to escape with only a warning for low punching in the 10th.Indeed, it was El Ouazghari who was harshly docked a point in the next when he charged in and was bundled over for a knockdown.Punching behind the head cost Murray a point in the final round but it mattered not – his now wobbling opponent unable to summon any last-ditch heroics to affect the result.Earlier at the Bethnal Green venue, Billy Joe Saunders won his eighth professional fight from as many attempts with a second-round stoppage of Turgay Uzun. – BBC

This author has not added a biography. Meanwhile ToP has contributed 18020 posts. Click here to view them.