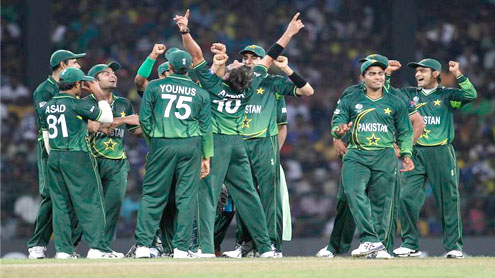 ISLAMABAD: Pakistan cricket team has become richer by more than $1 million due to their stupendous show in the tournament, where they lost the semifinal to eventual champions India. The World Cup also promises a financial boost for the Pakistan Cricket Board, which lost the hosting rights in 2009, shortly after militants attacked the Sri Lankan cricket team in Lahore. According to reports the Pakistani team scooped up net prize money of $1 million and fifty thousand.

The prize money includes reward for Pakistan’s five wins in the group matches for each of which they won $60,000 plus 750,000 for reaching the semifinal of the tournament. Pakistan won six of their eight matches, including against Australia and runners-up Sri Lanka in the competition. According to the regulations, the International Cricket Council will pay the prize money directly to the PCB, which will distribute it among the players and officials.

The Pakistan players can also expect cash bonus prizes for reaching the semifinal from the Pakistan Board. Punjab chief minister Shahbaz Sharif has already announced that he will distribute half-a-million rupees each to every player of the team for their good performances. A source in the Pakistan team said that players decided to share their prize money with the management and support staff. The PCB will also be richer by around $8 million, which was assured to them for being the co-hosts. However, Pakistan did not host any match due to security concerns by the ICC while another undisclosed amount is also due to the PCB as their share of the revenues from ticket sales, advertising revenues and hospitality boxes from the 14 matches.“The money from the World Cup will definitely improve our financial health as we have already lost out on a lot of estimated revenue due to India’s refusal to tour Pakistan in early 2009 for a bilateral series. We have also been forced to play our last few “home” series abroad at neutral venues – Dailytimes