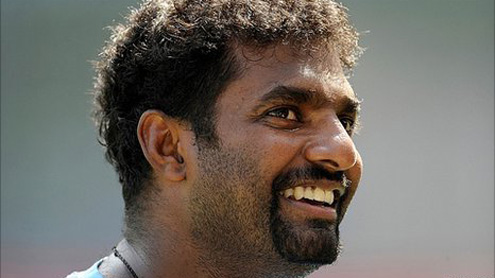 Sri Lanka spinner Muttiah Muralitharan is set to put his body on the line in a bid to end his career with victory over India in Saturday’s World Cup final.

The 38-year-old is expected to take the field in the Mumbai showpiece despite struggling with hamstring, knee and groin problems during the tournament. Sri Lanka all-rounder Angelo Mathews is out with a thigh injury, while India seamer Ashish Nehra is a major doubt.
India batsman Sachin Tendulkar is eyeing his 100th international century.
And while the majority of the 38,000 crowd at the Wankhede Stadium will be cheering on their prodigal son, Sri Lanka fans will be pinning their hopes on Muralitharan, who as a 23-year-old helped the small island nation stun the cricket world by beating Australia in the 1996 final in Lahore.
Muralitharan, who claimed a wicket with his last international delivery on home soil in the semi-final victory over New Zealand in Colombo, needs three more to equal former Australia fast bowler Glenn McGrath’s World Cup record of 71 wickets.
Sri Lanka captain Kumar Sangakkara stopped short of guaranteeing Muralitharan would play, but stressed the off-spinner’s importance to the side.
“He’s a big-match player, he has been amazing for us,” said Sangakkara.
“It’s great to have him in the side and it would be great to hopefully have him on the field tomorrow and to have him play this World Cup final with us because there is no other way we can have it.
“Whatever happens we want to play for him, and play for each other and do the best that we can do.”
Mathews, 23, has been ruled out with a right thigh injury suffered while fielding during Tuesday’s semi-final.
Batting with a runner, he helped Sri Lanka clinch a five-wicket victory with an aggressive 14 not out.
He has been replaced in the squad by Suraj Randiv, who has 22 wickets in 21 one-day internationals and could provide spin-bowling cover for Muralitharan.
But Mathews’ absence leaves paceman Lasith Malinga as the only seam bowler remaining from the semi-final – so back-up seamers Thisara Perera, Nuwan Kulasekara and Dilhara Fernando will be in contention, although without Mathews to bat at number seven, the length of the Sri Lankan tail will be a concern.
Meanwhile, left-armer Nehra is almost certain to miss the final after injuring the middle finger of his right hand in the semi-final win over Pakistan.
India captain Mahendra Dhoni said no decision had been made whether Nehra would be replaced in the team by an additional seamer in Sreesanth or a second spinner in Ravichandran Ashwin.
“The Mumbai wicket usually has a bit of bounce and a third seamer gives me the option to manoeuvre the attack,” he said.
“But if we feel there could be turn in the wicket as the game progresses, Ashwin will come into the picture. It helps to have such good options.”
Dhoni said left-handed batsman Gautam Gambhir was fit to play after recovering from a minor hamstring strain he developed while fielding against Pakistan.
In the first all-Asian final, all eyes will be on Tendulkar in his home city.
The 37-year-old is playing in his sixth World Cup, and will be desperate to help his team land the trophy it has only captured on one occasion, in 1983.

The “Little Master” scored two hundreds in the group stage and looked on course to reach the 100 century landmark in the semi-final before he was dismissed for 85 following an uncharacteristically scratchy knock in which he was dropped four times. “Going back to Mumbai, especially for this event, is a wonderful occasion,” said Tendulkar. “All I want to say is, we want to be calm, focus on our job and get the job done.” In the build-up to the final, Dhoni paid tribute to Tendulkar, who made his India debut as a 16-year-old in 1989. “God has made Sachin to play cricket,” said Dhoni. “He has been doing it for 21 years and a few more years to come.” With India the marginal favourites to win the trophy, Sangakkara is hoping the weight of expectation could tell on their players.

“Everyone in the world expects India to turn up tomorrow and win this game,” he said.”We have to understand the fact that India for the last year or two years have been tagged as the favourites by almost everyone to win the World Cup.”I’m sure they’ll be looking at themselves as favourites too. “Dhoni is playing down the pressure on his team.
“We are not thinking about tomorrow’s game as a final, for us every match is a challenge and just as important,” he said.
“These matches are called by different names like quarters, semis and final. In the end you have to play the same way and do the right things to succeed.