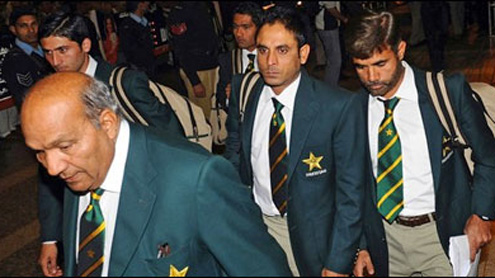 LAHORE, April 1 (APP): Punjab Chief Mohammad Shahbaz Sharif has urged Pak team players to continue hard work with commitment to perform better in coming international cricket events. He was talking to media after receiving members of the Pakistan cricket team who arrived on Friday from India after taking part in the ICC world Cup.
Misbah ul Haq, Abdul Raazaq,Abdul Rehman, Kamran Akmal, Umer Akmal, Mohammad Hafeez, Ahmad Shahzad,Shoaib Akhtar and Wahab Riaz along with team manager Intikhab Alam, coaches Waqar Younis and Aaqib Javed were given warm welcome on their arrival at Lahore airport. Chief Minister Punjab along with Chairman, Pakistan Cricket Board, Mohammad Ijaz Butt received the players who were profusely garlanded and showered with flowers petals on their arrival.
A big gathering of cricket lovers was also present at the airport to cheer the members of the cricket team.The people chanted slogns to acknowledge Pakistan team’s reaching the semi final in the Cup.
“It was a remarkable performance on part of the team and reaching the semi final was the result of hard work and collective team efforts”, appreciated Shahbaz Sharif.
He said victory and defeat are part of the game but these are major ways of “learning”. However,he advised the team members to continue their efforts by showing a higher level of hard work and commitment to fetch glory for the country in future cricket events.
He said the team put up a fine performance to reach the semifinals for which it deserves praise, adding that he would invite the team on April 5 to a reception to award cash prizes.
Chairman, PCB said he was delighted that the Chief Minister received the players to recognize their achievement of reaching the semi finals. Team manager, Intikhab Alam also thanked the Chief Minister for receiving the team members.He said the team performed well in the Cup but unfortunately they could not come up to the expectations in the semi final against India. “I am satisfied with the overall showing of the team in the mega event “.
In their brief reaction regarding the semi final and the worldcup the team members had different views: Medium pacer Wahab Riaz termed his five wicket haul in semi final against India “a memorable feeling “ which will always inspire him to do better. He said the team showed good performance in the cup but sadly it could not win the semi final.
“I am delighted the way I performed in the semi final and I look forward to do more in coming series”,said Wahab.
Saeed Ajmal said the team needs improvement in fielding to lift the level of its performance.
On the other hand, pace bowler Shoaib Akhtar refused to talk to media.
Mohammad Hafeez said he was satisfied with his performance in the grand cricket event and he would perform better in future because participation in the cup added to his experience and confidence.”Unfortunately we failed to rise to the occasion in the semi final for which we apologize to the whole nation but every team member performed to his optimum best in the Cup.
He said the team management fully backed and supported each member of the team in every match.”We have another important series ahead the tour of West Indies and we will do our best to perform a better show”,he said.Razzaq regretted it was unfortunate that the team could not give the gift of world cup to the nation by losing the semi final to India -APP