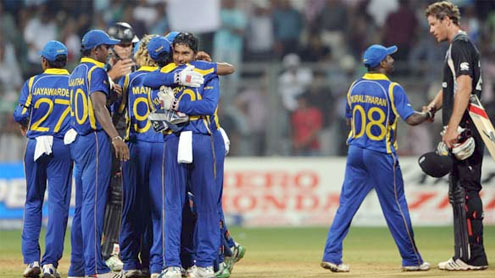 COLOMBO: Sri Lanka reached the World Cup final on Tuesday with a five-wicket win over New Zealand, ensuring that the World Cup will either be won by Sri Lanka or Pakistan and India, due to play second semi-final in Mohali today.Brief scores: New Zealand 217 all out in 48.5 overs (Scott Styris 57) v Sri Lanka 220-5 in 47.5 overs (Tillakaratne Dilshan 73, Kumar Sangakkara 54). Sri Lanka won by five wickets.

Sri Lanka, set a modest 218 to win, wobbled in the middle before reaching their target in 47.5 overs with Tillakaratne Dilshan (73) and skipper Kumar Sangakkara (54) setting the foundation at a packed R. Premadasa stadium. Muralitharan took his 534th wicket off his last ball on home soil as New Zealand were bowled out for a below-par score of 217 in 48.5 overs.Muralitharan, who last year retired from Tests after finishing as the highest wicket-taker with 800, now aims to win his second title — after being part of the 1996 Cup winning squad – in Saturday’s final in Mumbai. Sri Lanka, cruising along at 160-1, lost four wickets in the space of 25 runs to raise fears of an unlikely defeat before Thilan Samaraweera (23 not out) and Angelo Mathews (14 not out) guided them home with an unbroken 35-run stand. The victory took Sri Lanka into their second successive World Cup final, after finishing runners-up to Australia in 2007, as a capacity 35,000 celebrated with firecrackers. Sri Lanka play the winners of Wednesday’s semi-final between India and Pakistan in Mohali. New Zealand, who for the sixth time failed in a World Cup semi-final, seemed to be succumbing like England did during their 10-wicket quarter-final defeat at the hands of Sri Lanka, but they staged a brave rearguard action. It was 34-year-old Dilshan who was once again in rampaging mood, taking the co-hosts to 40 by the eighth over in the company of Upul Tharanga who fell after scoring a 31-ball 30 with four boundaries and a six. – Nation