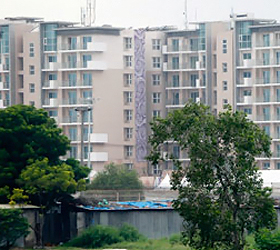 Athletes from England are set to fly out to India for the Commonwealth Games – despite the team’s chief describing some of the accommodation as “dangerous”. Craig Hunter stated in Delhi, that organizers  have not taken enough action to resolve the problems – with just 11 days until the opening ceremony. Earlier, Team England chairman Sir Andrew Foster said athletes remained “intent on going”, but conceded some may still opt to pull out of the tournament unilaterally. The first 22 squad members, from lawn bowls and men’s hockey, will fly to India on Thursday evening.
Sir Andrew insisted “all options remain open” and reassurance from organisers was still needed. Speaking from Delhi, Mr Hunter told Sky News the accommodation for England’s athletes was “in the best shape of the teams here” – but he had concerns for other competitors.

“We looked in some towers today… There is no plaster on the walls, they are deep in water and extremely uninhabitable and quite dangerous in many respects. “We still have a window of opportunity, but early next week it’s crunch time. “We have to have accommodation available for our athletes so they can prepare for a major sporting event. “They have been planning for this for a long time and need to be assured that there is a safe and secure environment.” A statement from Commonwealth Games England said “urgent action will be taken to address the significant operational issues which exist”. The competition was thrown into more chaos after several ceiling panels fell in at the weightlifting arena – a day after a bridge collapsed. Following the latest calamity, Scotland said it was delaying sending its athletes to Delhi over health and safety fears. Wales gave organisers a deadline of Wednesday evening to confirm whether the venues are fit for purpose and the team is expected to make a decision in the next 24 hours. And Mike Fennell – the Games’ federation chief – announced he was travelling to the Indian capital for emergency talks. But speaking on Jeff Randall Live, Sir Thomas Harris of the UK India Business Council argued the damage to India’s reputation caused by the crisis will only be temporary. “It’s very embarrassing for the Indians… but I think this is not typical of India. There are plenty of examples in India of world-class investment projects going ahead.”
A further embarrassment for organisers came when a false ceiling collapsed on Tuesday at the stadium’s 2,500-capacity weighlifting arena. No one was injured. The shooting of two foreign visitors by suspected militants combined with a dengue fever epidemic, heavy monsoon rains, delayed construction and traffic chaos have added to fears. Some of the world’s top athletes have already pulled out amid widespread anger over India’s last-minute preparations for the Games. Buildings are unfinished, two structures have now collapsed at the main stadium and the athlete’s village is said to be filthy. On Monday, 27 people were injured – five critically – when a footbridge linking a parking area with the Jawaharlal Nehru stadium collapsed. Michael Cavanagh, chairman of Commonwealth Games Scotland, told Sky News he had decided to delay sending his team because Indian officials “hadn’t done enough to make the athletes’ village safe”. He said he had spoken to the chiefs of other countries taking part and they all had the same concerns. But he added: “We’re doing everything in our power to make sure Scotland goes to the Games.” Around 8,000 athletes from Britain and its former colonies are due to take part in the competition.
Triple-jumper Phillips Idowu pulled out citing “safety concerns”, as has Australia’s discus world champion Dani Samuels – and more top stars are expected to follow. Samuels said: “I believe there are too many potential hazards to my health and life.” The Australian government has said it is confident India can sort out the problems in time – but admits there are concerns about the safety of its athletes. India has had seven years to prepare for the competition. “Fingers crossed, India may pull off a miracle,” said Boria Majumdar, a sports historian who wrote the book Sellotape Legacy: Delhi and the Commonwealth Games – Skynews