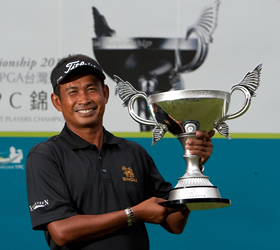 Taipei, September 19: Thailand’s Thaworn Wiratchant was declared the winner of the inaugural Yeangder Tournament Players Championship (TPC) after it was reduced to a 54-stroke play tournament due to Typhoon Fanapi which hit Taipei on Sunday.

With the dangerous storm packing winds of up to 162 kilometres per hour, play for the final round at the Linkou International Golf Club was unplayable and officials had no choice but to shorten the inaugural event to three rounds.

“The threat of Typhoon Fanapi today was a very serious one and it would be very dangerous if we allowed play to continue. We had no choice but to cancel the final round and reduce the tournament to 54 holes,” said Wanchai Meechai, Asian Tour’s Tournament Director for the Yeangder TPC.

The Yeangder TPC is the second event on the Asian Tour Schedule to be reduced to 54-holes after the Ballantine’s Championship in Korea this season.

The 43-year-old posted a two-under-par 70 to take the third round lead and win his 12th Asian Tour title with a three-day total of 10-under-par 206.

“I’m happy to have won my 12th Asian Tour title this week. It does not really matter whether I won it after 54 or 72 holes. As long as I did it, I’m happy,” said Thaworn.

“Now that I’ve won my 12th title, I’m looking forward to extending my winning record on the Asian Tour,” added the Thai.

Compatriot Chinnarat Phadungsil carded rounds of 70,70 and 67 to take second place on 207 while Malaysia’s Iain Steel took third place with his three day scores of 68,69 and 71.

The Yeangder TPC was broadcast live over two days on Era Television, a nationwide cable TV network in Chinese Taipei with highlights on the Asian Tour’s global television network which reaches to over 40 countries worldwide.

Broadcast partners of the Asian Tour include Guangdong Golf Channel and CCTV in China, PCCW in Hong Kong, ABS-CBN in the Philippines, StarHub in Singapore, Sportscast in Chinese Taipei, SportTV in Portugal, Fox International in the Middle East, Canal+ in Spain, Iko Balkan in Balkans, Skysports in the United Kingdom, FoxSports in Australia, ESPN Star Sports in India, CCTV in China, Indovision in Indonesia, Astro in Malaysia, JGolf in Korea, Viasat in Scandinavia and True Vision in Thailand.

Leading third and final round scores