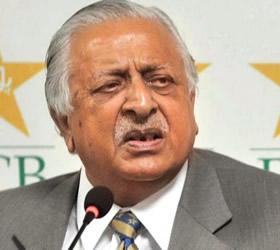 ISLAMABAD: Pakistan Cricket Board chairman Ijaz Butt said on Sunday his country had been unfairly targeted and that he will name the people behind spot-fixing allegations against players.

“We will shortly reveal the people, bodies and parties involved in this sinister conspiracy,” Butt told The Associated Press by a telephone interview from Dubai. “We reserve the right to sue them for the damage.” Pakistan won the third one-day international against England at The Oval by 23 runs on Friday before another spot-fixing controversy overshadowed its rare win during an increasingly controversial tour.

The International Cricket Council launched an investigation into tabloid allegations of spot fixing for the match at The Oval, after a tabloid newspaper suggested the scoring pattern in Pakistan’s innings was prearranged.

The probe comes just three weeks after the ICC suspended three Pakistan cricketers for alleged spot fixing in the fourth test against England in August.

The PCB has said it only knew the ICC was conducting an investigation into the third ODI through media reports.

An ICC spokesman told The AP that the game’s governing body had tried to contact Butt on Friday.

“As soon as we came to know that he (Butt) is in Dubai our chief executive met him Saturday evening and discussed matters of mutual interests,” the ICC spokesman said. -arabnews

At Lord’s, England captain Andrew Strauss cautioned against abandoning the one-day series with Pakistan despite the latest allegations.

“It’s a hard thing to stop a series when we don’t know how credible the evidence is,” Strauss told reporters.

Both teams return to Lord’s for the fourth ODI on Monday with England leading the five-match series 2-1.

The series ends with the fifth match on Wednesday at Southampton. -arabnews