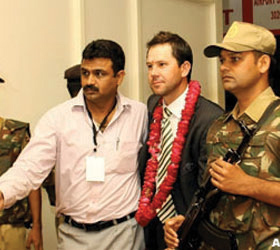 The Australian cricket team on Monday arrived here for a Test and ODI series against India starting October 1 in Mohali.

The Ricky Ponting-led side will leave for Mohali this afternoon where it is scheduled to play against Board President’s XI in a three-day practice match from September 25.

The Test series between the two sides would be played in Mohali and Bangalore (October 9 to 13).
This would be followed by a three-match ODI series starting October 17. The matches are scheduled to be held in Kochi, Visakhapatnam and Goa. – Indianexpress