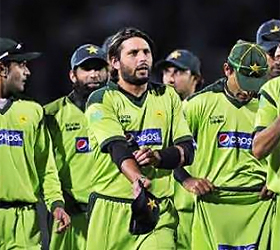 LONDON: The match-fixing scandal continues to get bigger in proportion and Pakistan  remains at the center of it with reports now emerging that the ICC is investigating the team’s third one-dayer against England as it might have been rigged by “illegal betting syndicates in India and Dubai.” British tabloid ‘The Sun’ claimed that the ICC “acted after its probe exposed evidence apparently showing that bookies knew details of Pakistan’s innings before the match even began.” The latest revelations comes close on the heels of the spot-fixing scandal that led to the suspension of Pakistan Test captain Salman Butt and the pace duo of Mohammad Aamer and Mohammad Asif. “The new investigation will center on suspicious scoring patterns in Pakistan’s innings and on two suspect overs during yesterday’s match at The Oval,” the report stated.

“Illegal bookies in India and Dubai apparently knew in advance what would happen so they could launch a betting coup. But The Sun’s undercover team was able to pass details to ICC inspectors before the match began.” According to the newspaper, the scoring pattern of the game matched with the “target that bookies had been told in advance by a fixer.” “It is not thought that the overall result was fixed, only scoring rates in parts of Pakistan’s innings.

Pakistan won the match by 23 runs to keep their hopes alive in the five-match series after losing the first two games.
The tabloid claimed it “received details of calls between a notorious Dubai-based match fixer and a Delhi bookie.” “We alerted ICC corruption busters led by ex- police chief Sir Ronnie Flanagan. After a frantic round of calls the ICC decided to issue a general warning to Pakistan’s players, but by then the game had started,” it said. “The Sun is withholding details of the alleged fix while the investigation continues – but we can reveal that horrified ICC chiefs launched their investigation before the Pakistan innings had even finished. The probe centers on an individual within the team camp who is believed to be the ringleader, taking money from bookies and ensuring their orders are carried out.”

The tabloid claimed that ICC chief executive Haroon Lorgat “thanked it for its investigation and pledged tough action on any players found guilty.”It said the ICC is also “investigating whether the same cartel rigged a Test between Pakistan and Australia in July after allegedly paying players 700,000 pounds.” – Timesofindia