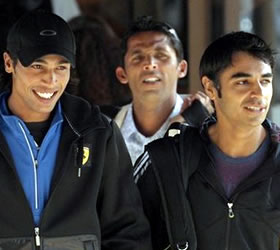 KARACHI: Law enforcement agencies here are searching for an unidentified bookmaker, who appeared on a television show and claimed that all the Tests between Pakistan and England last month were fixed.

The bookmaker, whose face was hidden, appeared in a talk show and claimed that there are two yet-to-be-caught players present in the Pakistan team who had been involved in match-fixing in the past.

The bookmaker also claimed that players were purchased by big bookmakers for bigger returns.

His claims come amid the raging controversy of alleged spot-fixing by the suspended Pakistani trio of Test skipper Salman Butt, Mohammad Asif and Mohammad Aamer during the same series.
Reliable source said soon after the interview of the bookmaker was aired, the law enforcement agencies got into action and were trying to locate and identify the man.

“The police and FIA are making inquiries about the man who has gone into hiding now. He is a bookmaker from Karachi,” a source said.

The bookmaker also alleged that some well-known players in the past had been involved in fixing matches and took the names of two top spinners and an opening batsman.

“It is a wrong impression that fixing deals are done on mobiles. Majority of the business is done on landline numbers and rates for spot-fixing and match fixing are initiated from England,” he claimed.

” India is the biggest market for bookmakers and spot-fixing is done the most in India,” he added.

He claimed that when fixing was done, selected bookmakers made a killing by knowing in advance which player will perform in what way.

“It is called player fixing and players are brought for heavy sums.”

He also made the startling allegation that there were agents working on behalf of officials in the cricket board who were also making money out of fixed matches and spot-fixing.

He said top bookmakers operated through agents who lured and coordinated with players.

A former senior player, when contacted, said it was hard to give credence to the man’s claims as he was not identified at any stage.

“If he is telling the truth then it is for the law enforcement agencies to locate him and arrest him and get information out of him.” – Indiatimes