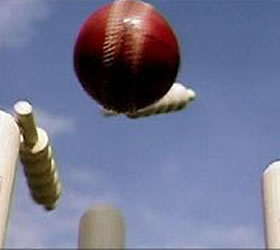 Betting on sport is huge business.

Sport England estimates the value of spending on sport-related gambling in England grew from £1.7bn in 1985 to £2.8bn in 2008. And that figure is likely to have grown further, with an estimated £1bn bet on the World Cup alone in the UK this summer.

Meanwhile, German research firm Sport & Markt estimates the overall global gambling market will be worth 263bn euros (£220bn) by 2012, with much of that driven by internet and sports gambling. But when the integrity of events are hit the gambling industry suffers, and revenues are put under threat if customers cannot bet with confidence.
And there can have been few higher-profile sport betting stories than those affecting cricket and snooker this year.

As Sport & Markt’s Gareth Moore observes: “Everyone talks about the sports gambling market now.
“Not only is it a significant market in world business, it is one that is now on the front pages of newspapers.” Four Pakistan cricketers have been questioned by police over spot-fixing allegations relating to a test against England at Lord’s last month.

Three of these players have said they will also challenge the corruption charges mounted against the trio by the sport governing body the International Cricket Council.

Meanwhile, three-times snooker world champion John Higgins was cleared of match-fixing allegations, but was banned last week for six months for failing to report the illegal approach to him to throw frames.

There are also two other continuing investigations – not related to Mr Higgins – into snooker.

“If the sport is perceived as honest, straight and fair that is good for betting firms because people will spend money betting with confidence,” he says.”If you take the Pakistan allegations, although unrelated to the UK regulated betting industry… it is not really a positive story for betting in the UK. “That is because the perception is that ‘cricket is now something we may have to be careful about’.”

So what can be done to prevent future scandals?
According to experts at a World Sports Law Report conference into sports gambling, the focus has to be on sportsmen and sportswomen. As Simon Taylor of the Professional Players’ Federation points out: “The only people who can fix a match are the competitors or the referee.”

His organisation represents men and women in 15 sports in the UK, being an umbrella organisation for all player organisations, such as the Professional Footballers’ Association.

He believes that it is not enough to merely have deterrents, sanctions and disciplinary procedures, but that the way to tackle potential issues around players is also through education.

Mr Taylor says rules need to be explained clearly to players with clear examples, and by people they respect.

“Through educating players about sports betting you strengthen integrity and that is in everyone’s interest,” he adds.

Matt Johnson, head of regulatory legal advice at the Football Association, agrees.”Prevention is better than cure, and we also make a point of telling players ‘you are going to be caught’.”

“It is imperative that sport is straight, and is seen to be straight,” he adds.

“If it loses that then people don’t want to bet, that is not in gambling firms’ interests, and it is not in our interests.” He said that once a good reputation was lost, the damage to a sport was “incalculable”. FA rules mean players are not allowed to bet on a competition in which they are involved.

Mr Johnson says players have to be seen not to be cashing in on any inside knowledge, which he says could cause “brand damage” to football and its competitions. So, even a Second Division player knocked out of the FA Cup in the autumn cannot bet on a Manchester United v Chelsea cup final the following spring.

“We have to get over to players the reputational risk to the game,” he says. “Once confidence has been damaged it is hard to get it back – mud sticks.”

An ex-chief constable of West Midlands police, Mr Tofiluk has responsibility for policing all betting in the UK apart from spread betting, which is the remit of the FSA.

“The overwhelming majority of sports betting taking place through UK operators is legal and fair,” he says. “But for some there is the temptation to… corruptly interfere with the outcome of a sporting event.

“Such cheating has the potential to undermine the integrity of a sport, and it also harms the commercial interests of sports bodies and sports betting.” The commission has developed an in-house Sports Betting Intelligence Unit to receive and disseminate information to sporting authorities, betting firms and policing authorities.

“Since 2007 we have experienced a significant insight into world of corrupt sports betting,” he says. “We will alert sports of our concerns, to help prevent or curtail [illegal] activity” In May 2010, the commission also introduced a confidential telephone hotline for those with information or suspicions.

But in a two-and-a-half year period there has been just one criminal prosecution, a 24-year-old man who was cautioned for cheating in relation to greyhound racing.

However, Mr Tofiluk says there are still eight ongoing investigations, and that much useful information has also been passed to sports authorities.

He said that where an investigation by a sport governing body was quicker, and more cost effective, then the commission would consider discontinuing a criminal investigation “in favour of letting sports governing bodies take the lead”.

Meanwhile, he says many of those looking to cheat the sports betting industry were knowledgeable about sports and sporting people, and about betting operations and the movement of money.

“They seek out the vulnerabilities of these to help in their enterprises.” -BBC