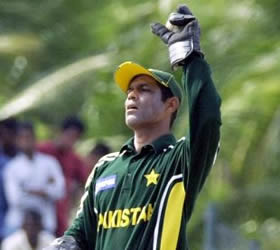 Rashid Latif has stepped down as the PCB’s wicketkeeping coach after being issued a showcause notice by the board for remarks the former captain made about the ongoing spot-fixing scandal on a TV show.

“I have sent my explanation to the board with reference to the notice but I would like to make it clear here that while it is an honour to serve Pakistan cricket in any position I can’t remain quiet on a key cricket issue that could determine the future of Pakistan cricket,” Latif said in a press release.

“As a former player and captain, people look up to me and expect me to speak honestly and without bias and that I have done without meaning anything personal against anyone,” he said.

Latif argued on the show that had Ijaz Butt, the board chairman, been a responsible official, he would have suspended the trio of Salman Butt, Mohammad Asif and Mohammad Amir for their alleged involvement in spot-fixing during the Lord’s Test, without waiting for the ICC to do it.

Latif has predictably been a leading voice in the wake of cricket’s latest brush with fixing. In a widely-read column for Dawn recently, he questioned the motives of Mazhar Majeed, the player agent implicated at the centre of the NOTW sting operation, and Mazher Mahmood, the newspaper’s chief investigative reporter, who coordinated the entire operation.

Latif was one of the original whistleblowers in the matchfixing scandals that engulfed the game during the mid-90s. He accused several Pakistan teammates of working in collusion with bookies and even ‘retired’ from the side during the 1994-95 tour to South Africa, in protest at what he said was going on. He was to become a key witness through the Qayyum inquiries between 1998-2000 as well, which eventually led to life bans on former captain Salim Malik and fast bowler Ata-ur-Rehman, as well as financial penalties on a number of other leading cricketers.

“I have enjoyed working as wicketkeeping coach under the supervision of Ijaz Butt as Chairman of the board but as a former captain, I have other responsibilities as well to Pakistan cricket which has given me a lot,” Latif said.

Latif had also been working with the Afghanistan national side as batting coach but he stepped down in August, citing irreconcilable differences with officials in the Afghan board. It is believed, however, that Latif may continue his association with the Afghanistan side in a coaching capacity for the immediate future. -cricinfo