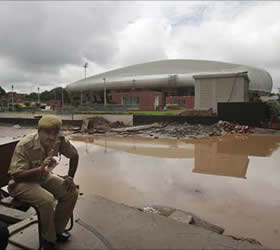 India’s Commonwealth Games  preparations have been unusually fraught. The organisers have pretty much proved the old adage of “what can go wrong will go wrong”.

There have been delays to the completion of venues, and there remain concerns that some stadium safety certificates might not be in hand in time for all the events to be held.

There’s been the inevitable political wrangling, allegations of corruption, changes of personnel, and problems with sponsors pulling out.

Organisers have had the Commonwealth Games Federation breathing down their necks for months, and there’s little evidence of the cordial warmth felt whenever the IOC’s inspectors come to London to check up on things.

On top of that, a number of high-profile competitor withdrawals and no-shows have diminished the strength of the competition, particularly in track and field, and track cycling.

Star draws like Usain Bolt and Chris Hoy will be absent, along with a host of others.

For some, the timing of the games is all wrong for their prioritised events like world championships, others, like the track cyclists, haven’t been helped by their international federation messing with the calendar. Frankly, some others just don’t fancy it.

It’s worth pointing out that the aquatic events will take place with strong fields, and there’s the promise of an “Ashes” in the pool between the cocksure Australians and the ever-improving swimmers from the Home Nations – England, Scotland, Wales and Northern Ireland.

All told then, it’s something of a nightmare for the organising committee… and it just got worse.

Adding insult to injury is the current spate of positive drug tests that have hit Indian competitors. In the past few days four wrestlers, a shot-putter and two swimmers, all in their respective Games squads, have tested positive for the stimulant, methylhexaneamine – its therapeutic use is for unblocking bunged up noses.

That might sound innocuous enough, but it’s been on the banned list since last year, so the World Anti-Doping Agency (Wada) will hear no excuses.

The two most recently affected are the swimmers Richa Mishra and Jyotsna Pansare. Mishra was the top woman performer at India’s recent national championships, with three individual gold medals.

It should be pointed out that both protest their innocence, and have asked for analysis of the B sample to be carried out, whilst making critical noises about the laboratory that carried out the tests.

However, Rahul Bhatnagar, the head of India’s anti doping agency, (one of the newest, as India was late to the national anti-doping party) is quoted in the local media as saying the authenticity of their testing methods cannot be questioned, so there’s a fight coming.

These failed tests follow a crisis for the Indian weightlifting team, who were punished to the tune of $500,000 (£325,000) by the International Federation for six positive tests last year.

Apparently, some of the money to pay the fine had to be borrowed as an interest-free loan from the Games organisers in order to make sure they are able to take part.

These are anxious times for the organisers, and just when they could do with some good news, their luck seems to be deserting them. -BBC