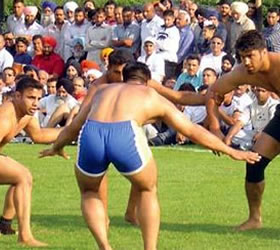 ISLAMABAD, (APP): The Pakistan Kabaddi Federation (PKF) will name its final squad for the Asian Games in the second week of October after the practice matches which will be arranged against tough departmental teams.

A 20-member Pakistani kabaddi team has been undergoing strenuous training since early June for the Asian Games.  In the five-week first phase, the team was trained under the home-grown coaches at the Lower Topa Murree.

On July 19, it was shifted to Islamabad where they are still training.

He said soon after the joint training camp with the Iranian team, the third and final phase of the preparations of the hosts Pakistan will be started in October and will last till the event in China.

Meanwhile, a 20-member Iran kabaddi team, including 16 players and four officials, will arrive in Islamabad on September 25 to undergo joint training with the Pakistan team in connection with the preparations for the Asian Games penciled in for November 12-27 in Guangzhou, China.

“Iranian team is due to land in Islamabad on September 25 to attend a joint training camp with the Pakistani team. The joint exercise will be held from September 25 to October 2,” the secretary of the PKF, Muhammad Sarwar told APP.
“It was Iran who had expressed its desire to visit Pakistan.  It would be a productive exercise and will benefit both the sides ahead of the vital China affair,” Sarwar added.  – App