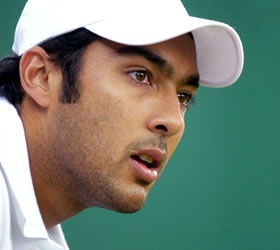 NEW YORK: Aisam-Ul-Haq Qureshi has reached the US Open men’s and mixed doubles finals and hopes to win both in tribute to the 21 million flood victims in his homeland.

Qureshi and partner Rohan Bopanna of India, trying to foster peace between their rival homelands, advanced to the men’s doubles final Wednesday by beating Argentina’s Eduardo Schwank and Horacio Zaballos 7-6 (7/5), 6-4.

The 16th-seeded duo will face US top seeds Mike and Bob Bryan in Friday’s championship match, but Qureshi has already booked another title date. He and Czech partner Kveta Peschke have reached Thursday’s mixed doubles final.

“The only motivation I have for these two weeks is to get these titles for the people back home,” Qureshi said. “I’m trying to send some positive news back home with the floods and everything.”

A flooding crisis began six weeks ago in Pakistan, the deluge devastation adding to the misery in an area already home to 1.7 million long-term Afghan refugees who have fled fighting in their neighbouring country.

Adding to the nation’s woes has been the disgrace of cricket stars Salman Butt, Mohammad Aamer and Mohammad Asif, who were suspended by the International Cricket Council (ICC).

The three allegedly conspired to deliberately bowl no-balls at specific moments during last month’s fourth Test against England at Lord’s.

Pakistan was also forced to play a Test series against Australia in England in July after international cricket in Pakistan was effectively suspended following an armed attack on Sri Lanka’s team bus in Lahore last year.

Qureshi has been quick to praise Bopanna’s role in helping him try to win some glory for Pakistan’s flood-hit people.

“I want to thank Rohan for helping me in doing this,” he said. “My partner has been great. I’m lucky to have him.”

Bopanna praised Qureshi for recovering from his mixed doubles semi-final Tuesday night to be at full strength to oust the South American duo and book a showdown with the Bryans.

“All credit to him. He had all his energy up,” Bopanna said. “It has been great to be friends on and off the court. I’m hoping I can help him take both titles back home and send some positive news to Pakistan.

“I’m really looking forward to the finals against the Bryans. To be the best you have to beat the best.” – Geo