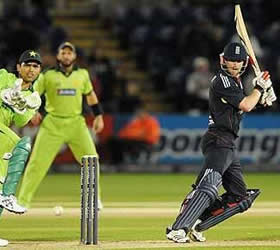 While the spot-fixing scandal continues to dominate cricket’s agenda, the NatWest Series is providing a dribbly and downbeat end to a grim season. The 5,821 loyalists in the stands on Tuesday night represented the smallest crowd ever seen for an England  Twenty20 match on home territory.

Virtually everyone has lost interest in these pyjama matches, yet thankfully there were at least 11 people out there on Tuesday with a rigid focus on the ball. These were the 11 England players, whose excellence in the two Cardiff matches has slipped by almost unnoticed.
This is a tribute to the professionalism of the players and coaching staff. It cannot be easy to go out and perform when the opposition are demoralised and distracted, and the public are increasingly cynical about the authenticity of the game. Yet England’s six-wicket win extended their Twenty20 winning streak to seven games on the trot – and so equalled the world record.

The match was competitive for about six balls – the creaky opening over bowled by Ryan Sidebottom. This brought 11 runs from the bat of Kamran Akmal, the most recent player to be investigated by the International Cricket Council.

Pakistan’s slide began on the 10th ball of their innings, when Akmal heaved a catch straight up in the air off Tim Bresnan. It was a virtual replay of the shot he played in Sunday, off the eighth ball that time. The tourists still seem to be following a script, although one hopes they are doing so out of incompetence rather than anything more nefarious.

From that moment, the innings evaporated in a haze of daft hook-shots, gigantic slogs and crazy run-outs. When Pakistan were bowled out for 89 with eight balls left unused, it was easily their worst total in Twenty20 internationals, though they had already gone lower in three of their innings during the Test series. What a shower of a summer this has been.

“It was irresponsible and immature,” said Shahid Afridi afterwards. “We have to take more responsibility and show more pride.” Asked about the effect of the spot-fixing charges, he said: “I am trying to keep these things away but it is very hard. We have to forget everything once we are inside the ground and focus only on the cricket.”

England’s bowlers – with the partial exception of Sidebottom – were completely in control. Stuart Broad concentrated on thumping the ball in halfway down, confident in the knowledge that none of the Pakistanis were capable of hooking with control. Michael Yardy gave nothing away, as usual, and Graeme Swann made the ball jerk sideways off a surprisingly dry pitch.

If we can identify a champagne moment for such a flat occasion, it must have been the ball Swann bowled to scatter Umar Akmal’s stumps. The younger Akmal had just supplied two rare moments of aggression, striking Swann back over his head for a pair of sixes, and so moving to the highest individual total in Pakistan’s innings (a miserable 17).

But Swann showed his strength of character by throwing the next one up even higher. Akmal took the bait, charging up the pitch like an Alsatian chasing the neighbour’s cat. The ball dipped and ripped through his gate, and another lime-green batsman was left looking like a lemon.

A critic might argue that England’s batsmen have not really fired as yet, with Eoin Morgan’s unbeaten 38 on Sunday still constituting the highest score of the Twenty20 series. Tuesday’s innings was a bit of a stuttering affair, and reminded us what a valuable player Kevin Pietersen has been in their middle order. But they still won with six overs to spare. -telegraph