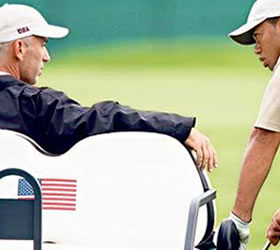 No one expects Pavin to leave out Tiger Woods on the grounds that America will be a better Ryder Cup team without their number one striker.

It seems impossible for the American psyche to comprehend such a thing. In 2008 America were unquestionably a better ‘team’ without Woods. It was the first time since 1995 – the match before Woods’s debut – that the US had led going into the singles. The Europeans noticed a different energy, yet most American golf gurus brand this ‘coincidence’.

It is almost a form of denial. America values individual achievement above almost all else and cannot accept that a red, white and blue painted giant could diminish others. Men such as Woods, at least on the golf course, are surely people to aspire to. Who could leave him out?

When Pavin even hinted at such a possibility earlier this year, Jack Nicklaus declared that you would have to be “brain dead” to omit Woods. Nicklaus was the first captain to lose to Europe on American soil and now you know why. The great individual is often the last man to understand how to make a team.

Although 12th in the US rankings, Woods has not even made a golfing case for inclusion this year. Prior to the conclusion of last night’s Deutsche Bank Championship in Boston, he had had no top-three finishes, he had played only 10 times, and had not had a top-10 finish for more than two months. He has just got divorced and changed coaches. Oh, and he does not like the Ryder Cup. You would have to be more brain dead to pick him.

Woods said: “I’m focused on just winning. If I win golf tournaments, then I think our captain, hopefully, will pick me.” Woods has not won and yet, despite all the negatives, Pavin sounds like he wants him in the team. One journalist even said that Pavin had told him he would pick Woods, a claim that provoked much waving of man bags.

The Europeans certainly do not mind Woods being in the team. Rory McIlroy said after the PGA Championship: “I would love to face him. Unless his game rapidly improves, I think anyone on the European team would fancy their chances against him.”

Pavin counters: “The perception is that having Tiger in the team can cause problems internally. The perception is just wrong. I watched him in 2006 and walked every step of the way with him the first two days of the matches. I looked into his eyes and I could see how much he wanted to win. I’m sure he wants to be part of a winning team.”

Assuming that Pavin does pick Woods when he announces his four selections at the New York Stock Exchange (10.30am, Eastern time, 3.30pm BST), he then has a problem of balancing his team. It is the Greaves conundrum.

Presumably Pavin will pair Woods with Steve Stricker after last year President’s Cup success, but where will the energy and the leadership come from? Will Mickelson and Furyk be able to lead with Woods around like they did two years ago? Will Hunter Mahan be able to provide the same barn burning intensity?

Pavin would love to be able to pick Anthony Kim to continue the Kentucky fire, but the 25 year-old has not made a cut since coming back from his long-term thumb injury. Rickie Fowler, who had a 7-1 record in the Walker Cup, would really bring some pep to the team, but will Pavin trust a 21 year-old with four rookies already in the side.

Most people expect him to opt for the experience of Woods, Zach Johnson and Stewart Cink and then just play his hunch with the next generation. It is the sort of conservative strategy that has failed before.

I would pick Johnson, because he stood up in Europe four years ago and is in form, and then throw in Fowler, JB Holmes and take a gamble on Kim. The TV executives would have a fit at Woods’s absence, but they do not have to worry. Pavin is unlikely to tune in to the kids channel.

How the US team is shaping up

Anthony Kim, age 25, (2008)
The star of two years ago but hasn’t made a cut since return from thumb injury.

Nick Watney, 29, (rookie)
Took big lead into the final round of the PGA and blew it.

Sean O’Hair, 28, (rookie)
Very solid ball striker who has been struggling for form.

Rickie Fowler, age 21, (rookie)
Big talent who has lost his game over the past month -Telegraph