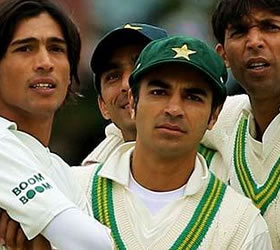 The Pakistan Cricket Board has also been ordered to submit all expenses paid to players, selectors, coaches and managers over the same period as the Pakistani government takes its first major step to combat corruption after the suspension of three players last week for alleged spot-fixing.

The Federal Bureau of Revenue in Pakistan has told its regional officers to collect details on bank accounts, assets, property and even cars owned by past and present cricketers who have played international cricket since 2005.

Israr Rauf, director of tax in the Federal Bureau of Revenue, said the investigations were separate from the Scotland Yard inquiry in Britain into corruption allegations. “We have a small tax base and when we heard in the news that the team was making so much money we thought we should check their tax records,” he said. “If we find something and if we have more credible information that they are involved in this kind of scandal then action will have to be taken. It is not linked directly to the spot-fixing scandal but, yes, we have taken note of media reports about the players building palatial bungalows and acquiring farmland.”

When asked about the move on MShafqat Rana, the Pakistan assistant manager, said: “I think it is a good thing from the Pakistani government if they are taking any action. It was in their mind before we came over. It should be done and it is good for cricket.”

The lavish lifestyles of Pakistan’s cricketers have been raked over in the Pakistani media since the allegations of spot-fixing hit the team last week. “There is a greed for money in our society and our players are part of this society,” said Tauqir Zia, who, as the PCB chairman, supervised the first judicial inquiry into match-fixing claims between 1998 and 2000. “Our cricketers come from humble backgrounds, they lack proper education and think their only chance to earn money is while they are playing, so they want to earn as much as they can and the match-fixing circle is vicious once you enter it. There is no way out.”

It has emerged that Asif, one of the three interviewed by police, has four homes in Pakistan, including an Italianate mansion in Lahore. Many of the team are also believed to have invested their legitimate earnings in property, including farms.

But news of the inquiry was greeted with scepticism in a country where the rich and powerful are routinely shielded from scrutiny. “I have my reservations about whether this will be carried out properly. I hope that it is,” said Tariq Azim, an opposition member of the Senate Standing Committee on Sport. “But lots of questions are asked here about where people get their wealth – going to the very top – and the investigations are never seen through.”

There have been clampdowns on the tax affairs of cricketers across the subcontinent before with the Indian authorities recently combing through the records of Indian Premier League players, commentators and umpires.

There has been no increase in the number of anti-corruption officers for the one-day series between England and Pakistan despite the recent allegations, although the players are reminded annually how to report illegal approaches.

“There’s an anti-corruption guy round the changing rooms all the time,” said Stuart Broad. “I don’t think any player could ever have an excuse – ‘I didn’t know’, or ‘We weren’t educated’. The amount of books I’ve got from the ICC at home, full of information – there’s certainly no excuse as players.”

Salman Butt: As captain, he is one of Pakistan’s biggest earners. Owns three houses in Lahore and is reported to be having a two-storey villa worth £300,000 built in the same city.

Mohammad Asif: Said to own four properties, including an Italianate-style villa in Lahore – worth around £650,000 – one in Karachi and another in his native Shikhupura.

Mohammad Amir: The 18 year-old has little family wealth, although his sponsorship deals with Pepsi and BoomBoom were lucrative. Owns a property in Lahore. -Telegraph