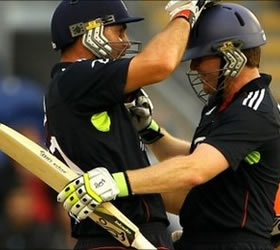 England underlined their status as World Twenty20 champions as they won the first of two internationals against Pakistan with 17 balls left.

With the controversy over Pakistan’s alleged spot-fixing plot hanging over the game, England weathered a mid-innings wobble to chase a 127 target.

England also had batting problems, but Eoin Morgan and Michael Yardy put on 67 from 43 balls in a five-wicket win.

They came together after Luke Wright had been bowled on the sweep for a duck, leaving England in a precarious position at 62-5 after 10 overs in Cardiff.

Many players on both sides had made batting look difficult on a slow wicket, with the ball stopping in the pitch.

But Morgan and Yardy timed the ball effortlessly well against all the bowlers, and Morgan’s cut for four off the first ball of the 18th over finished off the job with style.

While Morgan (38) and Yardy (35) were key in England’s sixth win in a row in Twenty20 cricket, Steven Davies also played a strong hand with 33 from 27 balls.

Paul Collingwood won a useful toss after play had been delayed by half an hour following rain, but Pakistan’s batsmen were well placed at 49-1 following the six-over power play with the veteran Mohammad Yousuf unbeaten on 26 and beginning to find his range.

The introduction of Swann forced Pakistan to re-evaluate their targets, however, as Yousuf holed out to deep midwicket in the off-spinner’s first over before Shahzaib Hasan was neatly stumped by Davies off a ball that turned a lot.

Umar Akmal was dropped by Tim Bresnan at short midwicket off Collingwood on five, but England continued to bowl tight lines and produced some fine boundary saves.

Pakistan were ironically hampered by one of their own players, Fawad Alam who produced a series of desperate swishes at fresh air in an innings of 20 from 29 balls before being put out of his misery.

England had a poor day with their catching as Shahid Afridi was missed twice in the 18th over, but neither he nor Akmal (35 not out) were able to time the ball cleanly enough over the closing overs to take Pakistan up to a total that was likely to trouble England.

The host team’s batting showed two changes from the team who lifted the ICC World Twenty20 trophy in Barbados in May.

Kevin Pietersen’s well-documented dropping, which one has to presume is temporary, has freed up a space at number three for Ravi Bopara, while Michael Lumb’s injury provided Craig Kieswetter with a fresh opening partner in Davies.

Kieswetter has had a mixed season at Somerset, and after cracking an early boundary off Abdul Razzaq, he nicked an attempted drive in a terrific opening wicket maiden bowled at good pace from the 35-year-old Shoaib Akhtar.

Davies played neatly, pushing the ball well into gaps for twos and adding the odd boundary, but he was unable to build partnerships as an inspired Shoaib had Bopara smartly caught by Yousuf, peddling back from mid-on.

The problems only increased when Wright became Afridi’s second victim, especially with the dangerous spinner Saeed Ajmal still to bowl.

But Yardy drove Ajmal’s first ball sweetly through the covers for four after Shoaib had dropped a simple catch that would have ended Morgan’s innings with the batsman on 13.

The two left-handers played Ajmal particularly well but also took regular boundaries off other bowlers as the required rate came down rapidly.

Pakistan soon had nowhere to turn to, though they will reflect that it was their batsmen, and not their bowlers, who had let them down – BBC