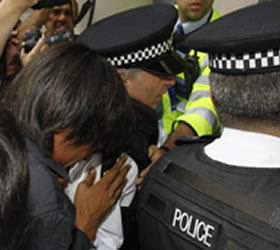 MUMBAI – Over 48 hours after a London tabloid, News of the World, sensationally exposed an apparent multi-billion dollar global match-fixing racket with international cricketers, an older sub-continental game started to re-run a soap opera, one starring corruption as villain returning in different guises.

Masterminds running the sinister criminal empire “Spectre” in James Bond movies could be novices compared to how the crooked and the damned reappear to haunt Pakistan and India.

Emotional dramas, as after the last major match-fixing scandal in 2000, were played out on Sunday, August 29, after the News of the World released stunning videos of what appears to be perhaps the most clear-cut proof ever publicly made available of mafia-engineered racketeering in sports.

The pay-off was for using Pakistan national team players to fix specific match-play during a five-day Test match between Pakistan and England in Lord’s, London.

Football, basketball, even tennis have had their share of match-fixing scandals. But to the disgust and fury of millions of ardent fans in Pakistan, no international sport has had a national team so often suspected of cheating as the Pakistan cricket team.

The latest evidence was staggering. To demonstrate his apparent control over at least seven Pakistan players, Majeed told the undercover reporter a day earlier of the exact moments when two bowlers Mohammad Asif and Mohammad Amir would deliberately bowl “no-balls”, or over-stepping the bowling crease to make the umpire signal an illegal delivery. The “spot-fixing” exactly happened as scripted; and the game took a bullet in the credibility chest.

It was great irony. The 196-year old Lord’s ground, called the “Mecca of cricket”, became home to the biggest scandal in history of a sport often hailed as the “gentlemen’s game”.

It was also deja vu. In 2000, the Delhi police shocked the cricket fraternity by releasing taped phone conversations between the then-South African cricket captain Hansie Cronje and a local bookie, during South Africa’s tour of India. Cronje later confessed to accepting bribes from bookmakers, was banned for life, and died two years later in a mysterious air crash.

Demolishing hopes of the game being cleaner, similar scenes were replayed in London 10 years later. Detectives from the Metropolitan Police, better known as Scotland Yard, raided the Pakistani team hotel, questioned players, seized unaccounted cash from their rooms, including that of newly appointed captain Salman Butt whom the “fixer” Majeed described as “ring leader” of the racket. Majeed was arrested and released without charge on Monday.

The price of cheating punters in England is 10 years as the Queen’s guest in jail. But the Butt and Co may have to worry. Stars in earlier match fixing scandals are far away from counting prison bars.

Mohammed Azharuddin, the former India cricket captain, who was banned for life in 2000 for match fixing and selling out his team and country, is currently a member of parliament, representing the Congress Party of Prime Minister Manmohan Singh.

Even Ripley’s might find Azharuddin’s entry into public life hard to believe. A decade after the scandal, entering “Azharuddin” in Google has the search engine automatically offering the suffix “match fixing” next to his name.

Waqar Younis, a former Pakistani cricket captain implicated in Justice Malik Qayyum’s inquiry into match fixing in the 1990s, is currently coach of the disgraced Pakistan team. Wasim Akram, also a former Pakistan captain punished for similar misdemeanors, is a leading commentator and bowling coach of the Kolkata Knight Riders, a franchisee in the Indian Premier League.

The question is whether the above gentlemen reaped rewards of hard work to reform, or whether corrupt criminal forces that had stained their lives had again maneuvered them into positions where they can do more damage.

A more sinister question looms whether the underworld and the mafia dons like the Karachi-based Dawood Ibrahim have taken a firmer grip of the three South Asian addictions: politics, movies and now cricket. Politicians, movie stars and cricketing superstars live in interlinking worlds in the sub-continent. Bookies appear to have wormed themselves into this world.

The Indian bookies mafia, Pakistan cricketers, match-fixing rumors and multifarious scandals have been close companions for over three decades. It included the suspicious death of Pakistan’s South African coach Bob Woolmer in March 18, 2007. Woolmer was found dead in his hotel room a few hours after Pakistan was knocked out of the World Cup, after a remarkable upset loss to rank outsiders Ireland.

The underlying reality is of corruption being the real game, not cricket. Bookies are often arrested for illegal betting in Mumbai, but let off soon after. About ten years ago, I interviewed crime branch police officials in suburban Andheri soon after they cracked a bookies’ network during a cricket series.

Audio cassettes of conversations police seized during the raid were dumped in an open cardboard box that lay carelessly atop a cupboard. The bookies were on bail, and police officials could not tell me by when they could file a charge sheet. It was no priority, or a lucrative cover-up.

Ten years later, India is part of a global multi-billion dollar match-fixing racket, fed from illegal betting. It’s legal to bet on horses in India, but not on cricket. It probably suits crooked policemen and politicians better, with the cricket betting “taxes” going into their pockets.

Politicians now dominate cricket in India, Pakistan and to a lesser extent in Sri Lanka. Sharad Pawar, the Indian agriculture minister and is president of the worldwide governing body International Cricket Council. Pakistan president Asif Ali Zardari is the Patron-in-Chief of the Pakistan Cricket Board.

The latest corruption sequel made idiots out of millions of cricket fans who stay awake or wake up at 3.00 am to catch matches live in the other side of the world. Ardent fans in India, Pakistan, Sri Lanka and Bangladesh, where cricket is a national obsession and often called a “religion”, pray and fast for their national team. The more unbalanced fans even commit suicide when their team fails.

Suicide-prone fans may hopefully realize their national cricketers losing could have less to do with gloriously uncertain fortunes of sport and more to do with bookie-related fortunes. Others may switch to a good movie as more honest entertainment, where everyone knows that the fake that pretends to be real is only a fake – Atimes