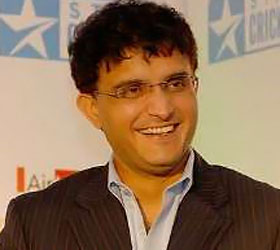 KOLKATA: Sourav Ganguly on Thursday said he had never been approached by any bookie during his stint as Indian captain, even as the world cricket is rocked by ‘spot-fixing’ involving Pakistani cricketers.

“Three former India captains — Sachin Tendulkar, Rahul Dravid and Anil Kumble — too were never approached and such a situation was beyond their imagination,” Ganguly told a TV channel.

Urging the cricketers to be responsible, Ganguly said the International Cricket Council (ICC) was not a policing body and could not have a constant watch on the players.

“ICC is not a police station, it has some set of laws. If those are violated, they will take action. Nothing is foolproof,” the 38-year-old said.

Referring to the ‘spot-fixing’ scam, Ganguly said “In our playing days, we could hardly believe such a thing. During my captaincy, betting issue used to figure in the discussions with Tendulkar, Dravid, Kumble and me. But nobody could dare approach us.

“May be they (the bookies) judge players by their characters before making the move. I can never in my life believe that this may happen. The captain and his boys have a role to play, they must act responsibly,” Ganguly said.

He further said those found guilty in the spot-fixing’ scandal should be “heavily punished”.

Without naming the accused — Pakistan Test skipper Salman Butt and pacer duo of Mohammad Asif and Mohammad Aamer — the left-hander said,” we should wait for the outcome.”

“The guilty should be heavily punished. These are all allegations, there is no proof yet. We should not make comments,” he said.

“Not just Pakistan is involved. I hear players from Australia and Bangladesh have been approached. It boils down to the players, it’s their as well as captain’s responsibility. They are playing as an individual, they should take responsibility,” Ganguly said.