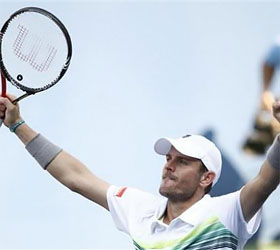 (Reuters) – Mardy Fish woke up to the news Thursday that his close friend Andy Roddick had bowed out of the U.S. Open prematurely and in acrimonious fashion.

Fish did not stay up late to watch fellow American Roddick get bounced from the tournament by Janko Tipsarevic since he had a second-round match of his own to prepare for.

Roddick’s early demise raised the level of home expectation on Fish, who finished third behind Roger Federer and Andy Murray in the recent U.S. Open Series.

But the pressure does not appear to be getting to Fish, who breezed past Uruguay’s Pablo Cuevas in straight sets 7-5 6-0 6-2 Thursday.

“I feel like I’ve been the underdog in most matches in my career but I want to be the favorite and winning a lot,” said Fish, who was a runner-up at Queen’s and Cincinnati.

“I’ve never had myself in a grand slam as a guy that people talk about to really do well there. I think my summer has changed that.”

Fish, who has lost 30 pounds (13.6 kg) since last season, is no stranger to expectation at Flushing Meadows, where an American man has not claimed the title since Roddick in 2003.

Home hopes were high after Fish captured silver at the 2004 Olympics but he went on to lose in the second round in New York that year.

In 10 attempts, he has only twice made it past the second round of the U.S. Open, this year and in 2008 when he reached the quarter-finals.

“I’ve played well the last couple of times I’ve been here and I’ve got a really good opportunity to get into the top 10,” said the 19th seed.

“I didn’t handle the pressure here before but I’ve learned from it. I’ve even learned from my first-round match (a five-set win over Jan Hajek) just to feel a little more loose and have fun and enjoy the spot you’re in.”

While Fish prepares for his third-round match, Roddick’s grand slam ambitions are over for another season following a match Wednesday where he went on a petulant rant when he became unsatisfied with a lineswoman’s explanation of a foot fault called against him.

Fish watched highlights of Roddick’s late-night match before his meeting with Cuevas but backed his fellow American to rebound.

“It’s disappointing to see him lose,” said Fish. “You are sort of bummed out for a friend and you know how much he puts into all the weeks that he plays. But he’ll be back.” – Reuters