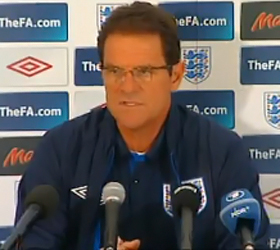 One day he is lauded as a “God”, shrugged Fabio Capello, the next he is vilified as a “monster”.

Brimming with disdain, England‘s manager dismissed all criticism of him and said he expected his team to take a giant stride along the road to Euro 2012 against Bulgaria at Wembley on Friday.

Whether Superman or Bogeyman, Capello is very much his own man, rounding on his critics at The Grove on Friday, claiming again that England’s World Cup nemesis was a Uruguayan referee called Jorge Larrionda, not class German acts such as Thomas Müller or Mesut Özil. Regrets, he’d had none.

For all the talk of a new dawn’s rays being cast over the teamsheet, Capello’s expected line-up is hardly opportunity knocks.

You say you want a revolution? Well, you know we all want to change the World Cup team. Not Capello. If John Terry and Frank Lampard had been fit, England would be starting with the same outfield 10 as slumped to Müller and Özil in Bloemfontein. Matthew Upson is in defence, Gareth Barry in midfield while Wayne Rooney partners Jermain Defoe in attack.

Sceptics got short shrift. Capello was in wonderfully spiky mood towards those who chronicle England’s fortunes, arguing that he had received only praise going in to the World Cup and that there has since been the biggest tune-changing since the Marx brothers entered the orchestra pit.

In truth, there had been oft-expressed concerns about 4-4-2 before South Africa, about his positional emasculating of Rooney and Steven Gerrard, his failure to start with Joe Hart and his lack of understanding of how bored England players get during tournaments.

Overall, though, Capello is correct. He enjoyed wide support on arriving on the High Veld but this turned to misgivings when it appeared he had changed.

Capello rejected the idea that his enthusiasm had drained, that his appetite had lessened when Rooney was injured against Bayern Munich.

“We lost one game in the World Cup, against Germany, after one big mistake for the referee,” countered Capello before adding icily: “You don’t remember this.

“But after this, your opinion about me changed completely. You wrote a lot of things different. But I live with this situation. It’s my job. You create the God, and you create the monster, no? It’s no problem for me.”

He was focused on Bulgaria. “I know this is a big game – for England, not for me.” Ouch. Was he distancing himself from the job? No, he insisted. His hunger for the role remained.

He leaned back in his chair, checked his watch, did everything but yawn. Capello actually dealt well with an inquisition that would have sent a politician scrambling to release lengthy explanatory statements.

“The pressure is normal for the manager,” replied Capello. “I remember at Roma, Milan, Madrid, here, it’s the same. It’s too easy to be the best when you win, but when you lose you lose everything. You have to fight. I’m a fighter.”

Pressure brought the best out of him. “I hope so. Usually, up to this.”

In a long, hitherto distinguished career, Capello has encountered such a mad circus and walked the high wire before. “It has been the same at Milan, at Madrid and now.”

During his second spell at AC Milan, in 1997-98, he started slowly and was sacked at the end of the season. At Real Madrid in 2006-07, the team struggled badly, and Capello was eviscerated in the press, but he restored David Beckham and scrambled to La Liga title.

He has dealt with ambushes. From all corners. Now Fifa’s technical experts have concluded that teams such as England lacked flexibility at the World Cup. So seized with contempt, Capello almost fell off his seat.

“Teams play 9-1,” he declared. “Is there a difference between 4-4-2, 4-5-1 or 9-1? That’s the modern style. See Barcelona. All the players defend, all the players go forward. We played this style, always with players defending and Rooney coming into midfield.”

So England play 4-4-2 with Rooney dropping off when the opponents have possession. The system will be on parade before 75,000 at Wembley tonight.

He believes Rooney is regaining sharpness after his World Cup travails. “I saw the game he played against West Ham. He started so-so, afterwards he played well.

He scored a goal, a penalty, and after that he played with the Rooney style. He’s been scoring goals in training and has done well.”

Capello starts with Hart in goal shielded by Glen Johnson, Phil Jagielka, Upson and Ashley Cole. Jagielka’s ankle has eased and he managed to train on Wembley’s pristine surface on Friday and felt, according to Capello, “just a bit of pain but nothing else”.

Gerrard, Barry and James Milner start in midfield with Theo Walcott likely to be unleashed down the right. “I think Gerrard will play in central midfield,” said Capello but added cryptically: “Barry and Milner will play in front of the two centre-backs.”

Capello insisted there was nothing untoward about the withdrawals of Lampard, who has undergone a groin operation, and Terry, who has been struggling with a hamstring but still performing for Chelsea.

“About Terry, we remember in the game against Hungary, he told me at half-time that he couldn’t play because the pain was getting worse,” said Capello.

“He played the last two or three games and, every time, with injections for the pain. Carlo [Ancelotti] said he played because they didn’t have a substitute because all the defenders were injured. He needs to relax to be fit for the next club game and I hope he will be fit for the game in Montenegro.”

Capello’s tough demeanour broke only once yesterday. Before getting up to leave, the Italian appealed for more patience from the supporters.

“I was concerned a little bit against Hungary in the last game. I remember the fans after 10 minutes, they stopped booing and supported us.

“I hope everyone supports us against Bulgaria because we need their support. We owe them. The supporters of England are the best in the world. We have to win.” – Telegraph