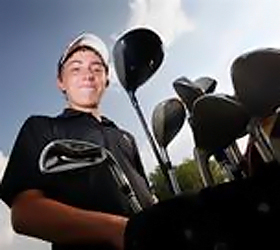 Zach Nash was shocked when he discovered he had one too many golf clubs in his bag a couple hours after winning a junior Wisconsin PGA tournament.

But rules are rules, and the 14-year-old from southern Wisconsin made a decision that might surprise some people: He disqualified himself and surrendered his medal.

”I knew right away I couldn’t live with myself if I kept this medal, so it was pretty instantaneous,” Nash said during a phone interview from his home in Waterford on Wednesday, his first day of high school.

Nash shot a 77 to win the boys 13-14 age division at the Milwaukee County Parks Tour Invitational, which is run by the Wisconsin PGA Section, on Aug. 11. He beat 31 other players in his division, all while his grandparents from Iowa were watching.

After his victory, Nash went to the Rivermoor Golf Club, where he played 36 holes nearly every day this summer, to practice more and talk to one of his mentors, Chris Wood, the club’s head golf professional.

”I was showing everybody my medal and then Chris and I went and we were having a soda and he said, ‘Hey, whose club is this? And I said ‘my friend’s.’ And he said, ‘This makes 15.’ I was in shock after that,” Nash said.

The penalty for breaking the rule, called rule 4-4, is two strokes for each hole played with more than 14 clubs, with a maximum of four penalty strokes. But since he didn’t notice his extra club during the tournament, a penalty wasn’t added. That meant he signed an incorrect scorecard, which he knew disqualified him.

Nash said golf prides itself on honesty and players calling penalties on themselves. While the decision was clear, he said he couldn’t help but cry a bit in front of Wood. Wood had to call Nash’s father, Bob, to pick him up.

Later that night, Nash called Andy Landenberger, junior tour director for the WPGA, to explain what happened. He sent back the medal, which Landenberger said he would present to runner-up Dane Reinhardt, who shot an 80.

Nash, who has been golfing for about three years, said a friend spent the night at his house before the tournament and left a 5-wood club, and he put it in his bag not realizing it made a total of 15.

Wood said Nash made him and the club proud.

”Most people — not just kids — would have tried to justify in their mind having the extra clubs in their bag and not using them as an excuse to not call and disqualify themselves,” Wood said.

Nash’s father said his son is a regular teenager — he talks back to his parents, picks on his brothers — and was a bit surprised the teenager didn’t consider, just for a moment, keeping the mistake to himself. But he said he did the right thing and he and his wife were proud.

”When I first heard it, when he told me the whole story, I thought, ‘Wow, you are doing the right thing,”’ Bob Nash said. ”You have to keep doing what’s right. But in the back of my mind, I’m thinking, ‘If you didn’t say anything, the standing wouldn’t change.”’

The boy’s honest deed was first reported by the Milwaukee Journal Sentinel.

Nash started his freshman year Wednesday at Waterford Union High School and plans to go out for the golf team.

He played in another tournament on Tuesday — and counted his clubs three times. The faux pas has made him a better golfer, he said.

”It kind of got me to be more aware of all the rules, especially 4-4,” he said – Foxsports