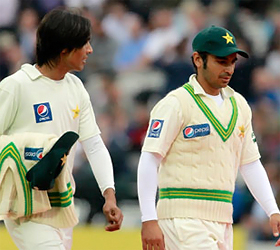 When it comes to Pakistan’s team of mercenaries, we need to understand a little more and condemn a little less

There are two possible reactions to the alleged betting scam involving the Pakistan team: you can cut them adrift, as Martin Samuel suggested in a beautifully composed article in the Daily Mail yesterday, or you can try to get them out of this mess. The cricket authorities, with their matchless ability to get it wrong in almost every situation, will try to do a bit of both, and thus make things worse.

The England and Wales Cricket Board’s priority seems to be to ensure that the rest of the Pakistan tour goes ahead – but without the alleged scammers being allowed to play. This is offensive at several levels: it assumes their guilt, thus reversing the usual judicial imperative; it puts money before principle (in some ways rather appropriate in the circumstances); and it makes a mockery of the cricket which would be played. England are already much the stronger team; now Pakistan would be deprived of their two best bowlers. The matches would be pointless.

Far better to scrap the rest of the tour, and, instead of playing a Pakistan XI, let England play a hastily assembled World XI, perhaps including some of the untainted Pakistan players (the supposed would-be whistleblower Shahid Afridi might, symbolically, be allowed to captain), alongside some greats of the past and the present from other countries. Put out urgent calls for Shane Warne, Sachin Tendulkar and Brian Lara; get Michael Vaughan and Nasser Hussain to strap their pads on one last time; organise a festival of cricket that encapsulates the most cherished features of this best of all games. And give a hefty percentage of the proceeds to flood relief in Pakistan.

That’s the immediate problem dealt with. The longer-term challenge – tackling the institutionalised corruption in Pakistan cricket – is, of course, more complicated. But far from banning the players involved, I would try to understand why they did it (if indeed they did), give them a slap on the wrists, and offer them one last chance. This is partly because I believe in the possibility of redemption, partly because it would be criminal (sinful even) never to allow the 18-year-old Mohammad Amir to play Test cricket again, but also because the key to the problem is not the uniquely vicious or stupid nature of Pakistan’s cricketers, it is the circumstances in which they have been forced to play.

The infrastructure of first-class cricket in Pakistan has always been shaky; now it is almost non-existent. Selection policies are unfathomable. Captains and players come and go with breathtaking speed. The life of the Pakistan cricketer can be nasty, brutish and short. Little wonder they take the money while they can. They are far less well paid than their English, Indian and Australian counterparts. In this series they will have been earning perhaps a tenth the amount of their rivals. How tempting it must be to bowl a no ball – something which will have little bearing on the overall match – for a substantial amount of money, more probably than they will earn for slogging away for five days against a well-paid, carefully honed team that has a battery of coaches, nutritionists, psychologists, video analysts and, no doubt, accountants to support it. This has been a series between the first world and the developing world, and is it any wonder that cracks have appeared in the team representing the latter? Pakistan have some immensely talented players, but they play in a vacuum; they are having to make it up for themselves as they go along.

Also, think about the psychology of this team. They have been on the road for months, in Australia and England, living in anonymous hotels, bored to death, surrounded by sycophants and bloodsuckers offering them gifts and money … and perhaps suggesting that if they don’t take the easy option bad things might befall their families back home in Pakistan. Current and former England players, blessed with the stability and comparative riches of the game here, have rushed to judgment without knowing any of the true facts or trying to understand the pressures on the Pakistan players.

Pakistan currently play no home Tests because of the security situation in that country; they are a team of exiles, forced to carry on because world cricket only has nine Test-playing countries and can’t afford to lose one, especially one with Pakistan’s rich cricketing heritage. The roots of the game have withered in Pakistan, and this group of talented young players tour the world like cricket’s equivalent of the Harlem Globetrotters. They are cricketing mercenaries, and we should not be surprised if sometimes they act in that way.

So, the solution? Pakistan should take a cricketing time out. This is a team that represents a failing state, and both the state and the team need help. Set up a board of unimpeachable figures from Pakistan and world cricket to set about overhauling the game in Pakistan. Identify the best 50 cricketers in Pakistan and attach two of them to county sides in England and state teams in Australia, to embed them in the structure of world cricket. Let them play in the Indian Premier League – they are currently excluded – so they can share the largesse of the top cricketers in other countries.

Assume that for five years at least it will not be possible for visiting teams to tour Pakistan, so let them play “home” Tests in Sharjah and elsewhere in the Gulf, where a large population of migrant workers from Pakistan give them a base of support. The International Cricket Council (ICC) will have to underwrite all this, as well as starting to rebuild the domestic game in Pakistan. And give all past wrongdoers an amnesty. Yes, what they did was disgraceful, but special circumstances prevailed, and sadly professional sportsmen do not in general take a romantic view of sport. They are more interested in their bank balance than in beauty, put accumulation before aesthetics. It is we, the fans, who seek some grand narrative in sport, even a sort of spiritual salvation. Players just play, and happily usually play to win, since that guarantees them money and sporting longevity. When that breaks down – as in Pakistan, which no longer seems to do longevity when it comes to sporting careers and where losing can sometimes be more lucrative than winning – the rules of sport are turned upside down.

Rather than condemn and punish, let’s try to understand and repair – the old liberal nostrum. Recognise the structural nature of the problem in Pakistan, let the past wrongdoers carry on playing, pay them properly so they aren’t tempted by shady fixers, and integrate them into world cricket. What 18-year-old hasn’t done something profoundly stupid? A single violation should surely not cost him what could be a magical career? His cricketing life has just begun; let him live it. Redeemed and with 600 Test wickets in 10 years’ time, he can tell succeeding generations how close he came to destruction – Guardian