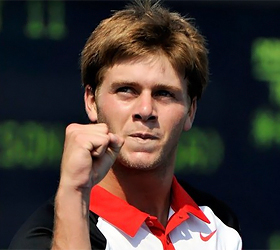 After requiring underhand serves just to qualify for the main draw of the United States Open, Ryan Harrison followed a more conventional path into the second round on Wednesday.

Making his United States Open singles debut against 15th-seeded Ivan Ljubicic, Harrison handled the heat and the moment with aplomb beyond his 18 years, mixing his tactics and looking considerably fresher down the stretch on show court No. 11 than the 31-year-old Ljubicic.

Ljubicic may not be playing as well as when he beat Harrison in two sets on his way to the title in Indian Wells, Calif., in March. But this was still a major upset, one that could point the way to bigger victories for the baritone-voiced Harrison, who was born in Shreveport, La., started playing at age 2 and won his first tour-level match at age 15 in Houston.

“I’ve always believed in myself; I have always had confidence in myself,” Harrison said, speaking clearly and calmly with his hands folded in front of him at a news conference.

Reading the tennis tea leaves is increasingly difficult. For every can’t-miss Federer who doesn’t miss, there are scores of promising teenagers who do miss because of injuries, insufficient drive or technical limitations.

But Harrison has Grand Slam evidence that he belongs at the elite level, and his goal, however immodest, is to become the next American tennis star.

“Absolutely I want to be that guy,” he said. “I have a ways to go to get there, but I’m definitely working as hard as I can. I’m really putting all the work in. I’m trying to stay open-minded as much as possible and take in as much advice as I can.”

According to the American veteran Mardy Fish, who has practiced with him, Harrison does not simply take in advice. He demands it.

“He’s a sponge,” Fish said. “He asks a ton of questions, sometimes too many questions, and we have to put him in his place every now and again and tell him to shut up. I think he’s going to be good, and I’m talking really good.”

For now, Harrison is ranked 220th in the world, although his victory Wednesday will take him well into the top 200.

While a talented player of Harrison’s age might have been given a wild card into the main draw in other eras, the United States Tennis Association required him to play in a wild-card playoff in Boca Raton, Fla., last month. He ended up losing in the final to Tim Smyczek in temperatures he said were well over 100 degrees.

“Whereas it is extremely hot here, and it is tough outside, it’s not what it was in Boca,” Harrison said.

He is the first American male teenager to beat a top 20 player in a Grand Slam event since Andy Roddick, then 19, beat Alex Corretja at Wimbledon in 2001.

“Roddick has been helping me since I was 15, 16 years old,” Harrison said. “Every time I see him, he’s always been extremely helpful and really talked to me a lot about some of the things he experienced when he was first coming up.”

But the biggest influence on Harrison’s career has been his father and longtime coach, Pat, who played at Oklahoma State and Mississippi. He later played on tour and coached at John Newcombe’s Tennis Ranch in New Braunfels, Tex., before the family moved to the Bollettieri Tennis Academy in Bradenton, Fla.

“Pat was at O.S.U. when I played at Texas,” the American coach Craig Kardon said. “He was a good player, and he’s done a good job with Ryan. Ryan’s got a big forehand, and he’s got a temper like his daddy’s, too.”

That temper and the combative nature that accompanies it were in evidence during the second round of qualifying here when Harrison threw his racket and railed against his misfortune during a match with the Portuguese veteran Rui Machado.

Harrison began experiencing leg cramps in that match but prevailed in three sets after resorting to serving underhand on multiple occasions. “The best underhand serve I’ve ever seen,” said Jay Berger, the director of men’s coaching for the U.S.T.A.’s player development program.

But against Ljubicic, there was no call for an underhand serve and nary an outburst.

“I usually do show a lot of emotion; I can usually get pretty fired up,” Harrison said. “I talked to my dad a little bit last night. He was, ‘Playing three out of five sets, playing in the heat in the midday, you’re going to need to save your energy.’ ”

In the end, there would be no need for a fifth set as Harrison finished with 13 aces and 44 winners and 33 unforced errors, displaying his all-court game by serving and volleying on occasion as well as blasting ground strokes from the baseline.

His next Grand Slam challenge: 36th-ranked Sergiy Stakhovsky of Ukraine in Friday’s second round – Nytimes