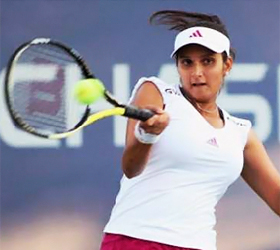 BANGALORE: Sania Mirza and Somdev Devvarman will have to be at the top of their games for their first round engagements at the US Open, beginning in New York on Monday.

Sania, who came through the qualifying draw, goes up against fellow qualifier, the big-hitting 17-year-old Michelle Larcher De Britto of Portugal.

The Hyderabadi, ranked 160, to De Britto’s 176, is second on Court No.7 (after an 8.30 pm IST start). Somdev’s clash against Kevin Anderson, the 6ft 8′ South African with a sledgehammer serve, is also scheduled for Court No. 7, as the fourth match of the day.

Somdev’s match will be a contest between the serve and the return. “I’m in a good place mentally,” Somdev told TOI. “I had good training coming into the Open. I’m hitting the ball very well. My whole team is excited about getting started here. Kevin is a good player and is undoubtedly enjoying his best season. He serves well and I’m going to have to take every chance I get. I will have to play extremely well to win.”

Somdev, ranked 99 in the world, to the South African’s 77, has never played Anderson on the ATP Tour. Somdev, aged 25, and Anderson 24, played the US Collegiate Tour before turning pro in ’08 and ’07 respectively.

Sania’s clash against De Britto promises to be a slugfest. Like the Indian, the Portuguese teen hits a heavy ball. De Britto, ranked in the top 100 last year, has a big forehand with which she likes to dictate play.

Sania said: “De Britto is one of the highly rated new talents on the Tour. She is extremely consistent. Like me she also has the confidence of coming through the qualifying rounds with three good wins.”

Sania, who returned to the Tour in June after a four month break due to a recurring wrist injury, has struggled with match play, more so on American hardcourts where she found little success this year.

“I’ve played enough tennis at this level to understand that it takes time to comeback from a long injury break,” Sania said. “I knew I would need a few months to find my feet again in professional tennis. I think I’ve made some progress over the last few weeks and coming through the US Open qualifiers is a definite confidence booster.”

In the qualifiers, at the Big Apple, Sania seemed to have turned the corner with some well fought wins. In the second round of the qualifying competition she beat Russian Elena Bovina, ranked as high as no.14, four years ago.

In the final round, she put out Colombian Catalina Castano, formerly ranked in the top 40 – Timesofindia