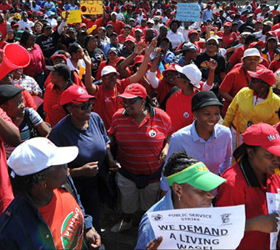 A good analysis of the politics behind the current, indefinite, public service strike action that is starting to bite, painfully, at schools, courts and particularly hospitals across South Africa.

The World Cup honeymoon would appear to be winding down.

Does this country need a “Thatcher moment”? If it does I can’t imagine it happening yet. President Zuma – master of consensus – owes too many favours to the left, and lacks the appetite and stomach for that particular fight. Besides, he might well not win – especially with the ANC’s elites so publically addicted to personal profligacy in the face of real hardships among so many workers.

Not for the first time, industrial action here has revealed the fundamental political absurdities at the heart of South Africa’s tripartite alliance – an increasingly threadbare umbrella that strains to cover strict monetarists and the communist party, whose youth league called this week for “an end to capitalism!”

But reports of the alliance’s death remain exaggerated. Too many people still benefit from club membership – BBC