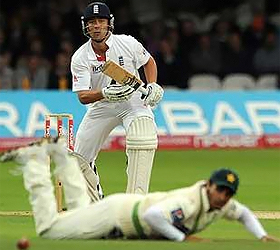 Only a dozen and half overs were possible at Lord’s on Thursday, as persistent rain swept in from the south, but it was long enough for Andrew Strauss to extend his lean run with the bat.

With Ricky Ponting crowing about cracks opening up in England’s batting and Kevin Pietersen admitting pangs of self-doubt, the rest will need to play well on Friday if those taunts aren’t to be amplified by the time they reach Australia

Strauss was out to Mohammad Asif just nine balls before the umpires decided the light was too bad to continue, a decision that usually irks the outgoing batsman. Yet, with a wicket looking a possibility every over, as the two Mohammad’s, Amir and Asif, again bent the ball to their will, England were fortunate that play was as limited as the damage to their batting.

Both teams would have wanted to bowl first, but Salman Butt won the toss. Given a taste of glory with his career best 5-52 at the Oval, Amir tore in from the Pavilion End.

As of this morning he is 18 years and 136 days old and needs another five scalps to be the youngest ever to 50 Test wickets. For the moment, Daniel Vettori, who was 19 years and 134 days old when he reached the milestone, holds the honour, though only if you believe Waqar Younis was born in 1969 and not 1971.

He should have been one closer even in the short window of opportunity available. Drawing Alastair Cook into one of his ungainly shoves at the ball, the ball flew to third slip where Umar Akmal continued Pakistan execrable showing in the field by spilling the catch.

Cook edged the next ball through the slips for four and one the after that to gully, though with both going along the ground he seemed to have learnt quickly that soft hands are safer than hard when the ball is darting about.

At the other end Strauss was looking reasonably secure. Having succumbed to Amir in four of his previous five dismissals during the series, England’s captain had probably studied the kind of graphic that Sky Sports broadcast when the start was delayed, where they’d logged the line and length of every ball he’d faced from Amir in the series. There must have been well over a hundred but, incredibly, only eight would have hit the stumps.

The message in the stats was: leave the ball more, especially when it is new, something Strauss judged pretty well to start with. But when you emphasis one thing in your mind, you can neglect another and he was fraction slow to cover up as Asif, a right-armer who’d only ever dismissed him once until Thursday, nipped one down the slope to bowl him off the inside edge.

Jonathan Trott replaced him and had enough time to get off the mark with an all-run four before the umpires called a halt for bad light, something that perplexed the crowd given the Lord’s floodlights were on full beam.

Floodlights and red balls don’t really mix that well and umpires are told to come off once artificial light takes over from natural. Last year the England and Wales Cricket Board said it would trial the use of illuminated sightscreens to see it they improved matters, but as yet nothing has been done.

Murk and bad light rarely seem to impinge in Australia, though with Ponting predicting doom and gloom for England you wouldn’t want the weather to be bad as well.

Having pointed out that England’s batting is beginning to crack enough for the support team to pack some Polyfilla with them this winter, he also returned to the theme of their bowlers struggling in Aussie conditions with the Kookaburra ball.

“We understand our ball, and how that works, better,” said Ponting. “I know England have got an Australian bowling coach at the moment. But you can do all the coaching in the world, it’s what you can actually do on the field, under pressure when it matters, that is the difference between winning and losing Test matches.”

Ponting is right on both counts but for now England’s bowlers only have to worry about his second point, especially if they are to win what has essentially become a four-day match – Telegraph