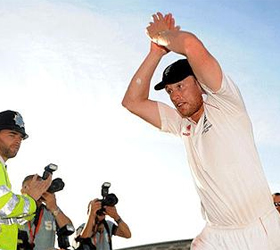 Andrew Flintoff has found himself unwittingly caught up in the power battle at the heart of Indian cricket following accusations that his deal with IPL team the Chennai Super Kings was part of a rigged auction.

Emails leaked to the Indian media suggest that N Srinivasan, the owner of Chennai Super Kings, and Lalit Modi, the then chairman of the IPL, had attempted to broker a deal that would see Chennai sign Flintoff over their rivals Rajasthan Royals.

The Royals eventually bid for Flintoff in the auction and Chennia were forced to pay $1.5 million. Modi was suspended earlier this year from his IPL post and is locked in a battle with Srinivasan, who is running for the vacant post of president of the Indian board.

An email written by Modi allegedly says, “What a nightmare to convince them [Rajasthan] not to terminate Tanveer [the Pakistan player Sohail Tanvir] and also not to take Flintoff. Warne went off the handle. But have managed it by using stick and carrot strategy. Thus they have $1.875million only. Much love Lalit.” Srinivasan replied: “Thanks. You are most sweet. Srini”

Chennai Super Kings denied the accusation and Rajasthan issued a statement which said: “The Rajasthan Royals participation in all of the IPL auctions have been entirely transparent at all times and as such we have no wish to be drawn into comment on any communications between BCCI officers, and processes chosen by the IPL.” – Telegraph