by ToP
in Political Parties
0 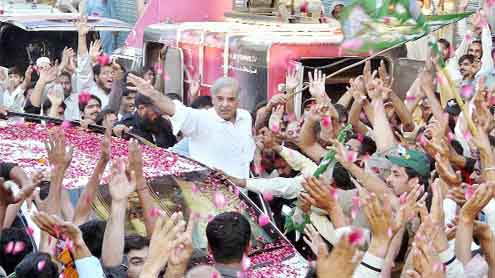 ISLAMABAD: With the polls just about a week away, electioneering has gained momentum in the federal capital.

Candidates from NA-48 and 49 have started addressing public gathering and are leaving no stone unturned to capture the voters.A hectic election campaign is underway this time around in Islamabad with candidates desperately chasing voters. Most candidates have used all available methods during the election campaign to gain votes, from traditional tribal affiliation to using social media like Facebook and Twitter.

Most of the candidates from federal capital have finished their door-to-door campaign and are now going for rallies and public meetings to persuade the voters. Flags of different political parties are hanging on commercial buildings as well as houses in the federal capital, giving a colourful and festive look.Candidates have also hired professional teams to design their posters, streamers, banners and pamphlets on which the slogans and manifesto are mentioned.

Mian Muhammad Aslam (Jamaat-e-Islami), Anjum Aqeel Khan (PML-N), Makhdoom Javed Hashimi (PTI) and Faisal Sakhi Butt (PPP) are making last-ditch efforts to increase their vote bank. Many residents of the federal capital believe Anjum Aqeel Khan may not have such a smooth sailing this time around, with charges of land scam and beating up a schoolteacher tainting his reputation.

Makhdoom Javed Hashimi is considered to be the most popular candidate this time because of the popularity of PTI chief Imran Khan. On the other hand, from NA-49 Mustafa Nawaz Khokar of PPP and Zubair Farooq Khan of Jamaat-e-Islami (JI) are considered to be strong candidates while the PML-N is in serious danger of losing the seat either to Mustafa Nawaz Khokar or Zubair Farooq Khan. Chaudhry Ilyas Meharban of PTI is considered a weak candidate from here.

Nominee of all the political parties have started organising rallies and even the supporters of different parties are now seen setting up election camps in busy areas of the federal capital in support of their respective candidates and political parties.As many as 708,813 male and female voters from two national Assembly constituencies — NA-48 and NA-49 of the federal capital will exercise their right of franchise in the upcoming parliamentary elections. The ECP has specified some particular places for political gatherings and large corner meetings in the capital. – DailyTimes