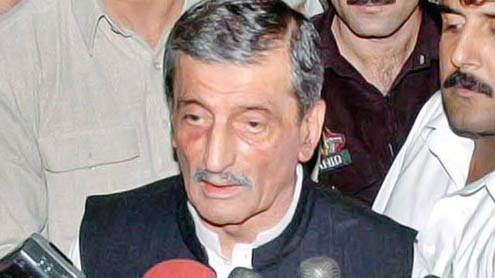 PESHAWAR: Awami National Party (ANP) has launched election campaign in Peshawar amid threats from militants, who had reportedly killed its 750 workers during the past five years.

The election drive of ANP was kicked off by its senior leader Ghulam Ahmad Bilour, whose younger brother and provincial senior minister Bashir Ahmad Bilour was killed in a suicide attack a few months ago, by addressing a rally in Gul Bahar area here on Monday.He claimed that they implemented their party’s manifesto during their government on the basis of which people would cast their votes in the favour of ANP.Mr Bilour said that ANP had its roots in people and believed in true democracy and always struggled to maintain peace in the country.

He said that Khan Abdul Ghaffar Khan got right of votes for the residents of the province, his son Abdul Wali Khan made relentless efforts for provincial autonomy. The party under the leadership of Asfandyar Wali restored the historical name of the province after a long struggle, he added.“For the sake of humanity, we rendered sacrifices in the shape of assassination of our workers by militants but our resolve for restoration of peace remained unbroken,” Mr Bilour said.He said that people were ready to support ANP for braving such a merciless campaign, launched against it by militants.

Mr Bilour, who is contesting election from NA-1, Peshawar constituency against Pakistan Tehrik-i-Insaf chief Imran Khan, said they had taken tangible steps to end militancy. He said that they would continue to struggle for restoration of peace in the province after winning the May 11 general elections.ANP candidate for AN-2 Arbab Najibullah Khan and its candidate for PK-5 Arbab Mohammad Tahir Khan also addressed election meetings in Tehkal and Palosai localities.

They said on the occasion that ANP launched development projects in education, health and other sectors during its five-year government. They said that the passage of 18th Amendment was landmark achievement of the party that was achieved after a long struggle. They vowed to render more sacrifices for restoration of peace.Later, Arbab Tahir Khan opened his election office in Lala Zar Colony near University of Peshawar and spoke with people. – Dawn