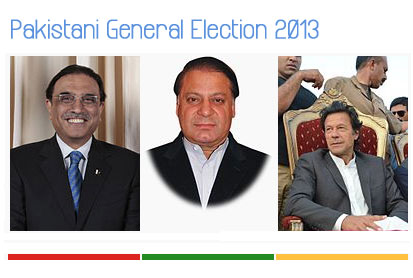 The Pakistani General Election of 2013 (Urdu: پاکستان کے عام انتخابات۳۱۰۲‎) will be the next election to the 14th parliament of Pakistan. The government of Pakistan has announced elections to be held on 11 May 2013. In the general election, voting will take place in all parliamentary constituencies of Pakistan, to elect Members to seats in the National Assembly, the lower house of parliament and to the four Provincial Assemblies (Punjab Assembly,Sindh Assembly, Baluchistan Assembly and Khyber Pakhtunkhwa Assembly).

The current National and Provincial Assemblies will complete its constitutional term on or before March 16, 2013, five years after the first session of the National Assemblies elected during the 2008 general election. Elections must be subsequently held within 60 days of parliament having been dissolved.

SC to resume treason hearing; defiant Musharraf may not appear

SC to resume treason hearing; defiant Musharraf may not appear