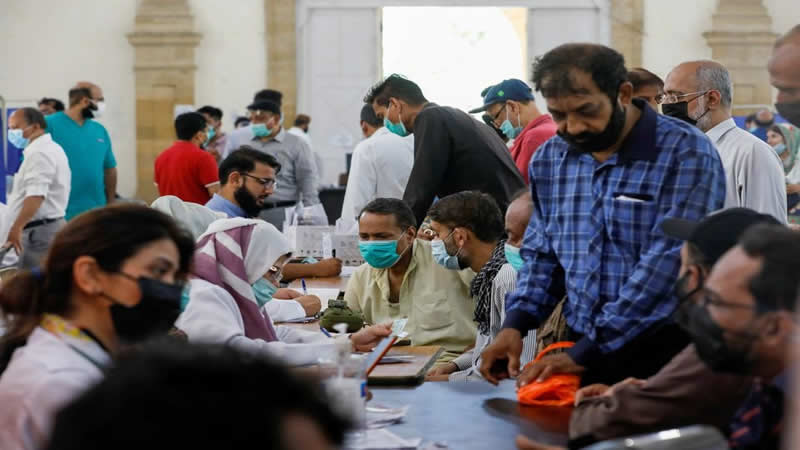 Over 100,000 persons, who were administered the first dose of the coronavirus vaccine in Sindh, have yet to visit the adult vaccination centres (AVCs) to receive the second jab, a senior health official disclosed on Wednesday. Officials suspect it’s the rumours of side effects and general skepticism around the vaccine that are keeping people away.

Speaking to The Express Tribune on the condition of anonymity, the health official said that over 25 per cent of the people who were registered for the vaccine have yet to approach the health department.

District officials of the health department have been directed to contact the absentee individuals and convince them to have the booster dose administered.

Sources in the health department revealed that 405,673 persons were scheduled to receive the second dose of China’s Sinopharm vaccine but only 300,949 persons have visited the designated AVCs thus far.

“The remaining 104,724 persons have yet to visit the centres,” said the senior health official. “It is unclear why they are not appearing for the second jab.”

Misconceptions about the vaccine and rumours about side effects could be a probable cause behind the reluctance to receive the jabs, he added. “Unverified stories on social media have led to uncertainty among the masses and ambiguity around the vaccines. But no adverse reaction [to the vaccine] has ever been reported anywhere in Sindh.”

There should be no fear of the vaccine, he stressed.

Sindh Health Department Spokesperson Atif Vighio confirmed to The Express Tribune that some people have missed the second dose of the vaccine. “[However] we have all the details of missing persons,” he added.

Their contact information, addresses and CNIC numbers of all those who registered are available with the department, he said. “I do not think they deliberately missed the jabs,” he added, however. “They came to the centres willingly for the first dose so why would they avoid the second one?”

And yet, sources privy to the matter revealed that the top officials of the health department have tasked district officials to immediately trace the absent individuals. The district officials have also been directed to ensure they behave politely with the citizens.

Meanwhile, as the authorities urge citizens to get vaccinated and stress on mass inoculations, the National Command and Operation Centre (NCOC) announced on the day that citizens above 19 years of age can register themselves for the anti-Covid jabs starting today (Thursday).

This deadly pandemic can be controlled if we implement coronavirus-mandated standard operating procedures (SOPs) and vaccinate every citizen, he said, while inaugurating a vaccination centre at the office of the Federal B Area Industrial Association (FBATI) on Wednesday.

The provincial government is setting up vaccination centres in industrial areas, press clubs and educational institutes to facilitate mass vaccinations, he said. It is essential for the resumption of industrial activities, he added.

According to the health department, 285 AVCs have been set up in the province and 1,106,384 persons have received the anti-Covid jabs thus far.