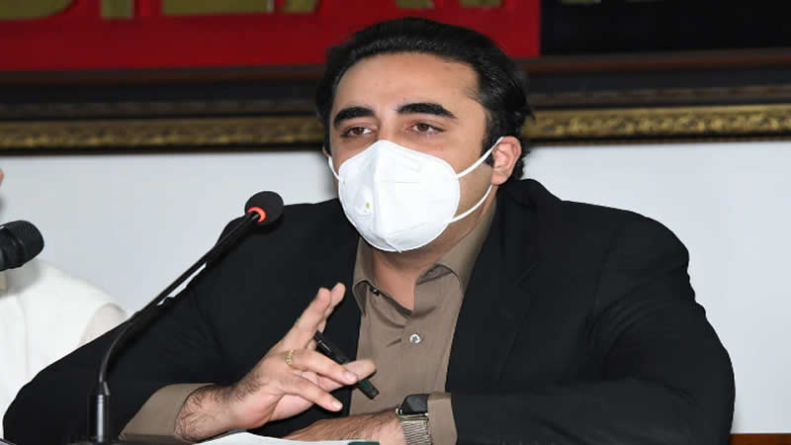 PPP Chairman Bilawal Bhutto Zardari on Sunday accused the federal government of failing to ensure fair distribution of water and depriving Sindh of its share.

“Imran Khan’s government is continuously blocking water for Sindh and did not refrain from its unjust move even during Ramazan and Eid,” he added.

In a statement issued from Bilawal House’s media cell, the PPP chairman said the PTI government had deliberately created a water crisis in Sindh and must be held “responsible for any consequences”.

“Water supply to Karachi has been severely reduced due to this [inadequate supply to Sindh],” he maintained.

“Other districts of the province including Thatta, Badin, Sujawal and Tharparkar are also facing water shortage due to the brutal policy of the federal government.”

The Indus River System Authority (IRSA) has misused its authority by reducing the water level in Sindh by 15-20%, Bilawal claimed.

He added that authority’s mandate was restricted to just monitoring and enforcement of the provisions of the Water Accord 1991.

He demanded that IRSA should stop the process of causing permanent damage to Sindh under its controversial three-tier formula as well as name the officials on whose orders it illegally reduced the province’s share of water.

Bilawal also demanded that Prime Minister Imran Khan should desist from suspending water supply to Sindh as it would make the province’s land barren.

He further called upon the authorities in other provinces to follow Sindh as it had not reduced the supply of water from Guddu Barrage to Balochistan despite the current shortage.

He claimed that the whole of Pakistan, including Khyber-Pakhtunkhwa, Punjab, Sindh and Balochistan, should get water under the agreed formula.

He warned the federal government that provinces which were deprived of their right to water would continue to raise their voice.

The PPP chairman alleged that 2,000 cusecs of water belonging to Sindh was being stolen via the controversial Chashma Jhelum Link Canal.

He demanded IRSA should stop issuing NOCs for setting up power plants on Taunsa Panjnad and Chashma Jhelum Link canals.

Bilawal said by allowing power plants to be built on Taunsa Panjnad and Chashma Jhelum Link canals, IRSA was trying to make an excuse for “illegal and uninterrupted supply of water throughout the year”.

He demanded that the process of “illegal” installation of power plants on Taunsa Panjnad Link and Chashma Jhelum Link canals should be stopped immediately.

He added that the continuous opening of Taunsa Panjnad Link Canal was unacceptable while Jhelum Link Canal could only be allowed to open if water was released downstream of Kotri.

The PPP chairman said due to the delay in repair of Tarbela Dam till February, water was being continuously and unnecessarily supplied due to which the dam could not be filled despite abundant water available because of rains.

Pointing out the agricultural problems arising out of the drought, Bilawal hinted at a conspiracy to cut Sindh’s water while the province was undergoing its ripe season for rice cultivation.

“[PM] Imran Khan should elaborate on the motive behind stopping the flow of water to Sindh,” he demanded.

The PPP chairman pointed out that the country was already facing a lower production of cotton.

“There is a shortage of crops, so cutting off Sindh’s water at the time of sowing would be disastrous for the textile sector as well,” he added.

In response, the IRSA spokesperson claimed that all provinces were receiving their fair share of water.

“Water is being distributed among the provinces under the 1991 water accord,” Muhammad Khalid Rana said in a statement.

“There is a shortage of water for some days due to lack of water in the rivers. However, now the situation is under control,” he added.

The spokesperson maintained that more water was provided to Sindh than Punjab during cotton cultivation.

“Sindh had to put up with only 4% water shortage so far while Punjab faced 16%. Now, water is being supplied to southern Punjab for cotton and other provinces were also being given water according to their share.”

Rana said that there was no plan under consideration in IRSA to set up a power house on Taunsa Panjnad Link Canal.

He added that water was being provided to Punjab through Greater Thal Canal for Chashma Jhelum Link Canal.

“IRSA hasn’t slashed the water share of any province. Every province has its representative in the authority and without which the distribution of water could not be decided.”

He said one million feet of water was available in the dams and water would be provided to the provinces according to their share even at the time of rice cultivation.

The spokesperson further claimed that IRSA was providing its full share to Balochistan but Sindh was also using that water.
“Balochistan is facing 61% water shortage.”

“At present 71,000 cusecs water was being supplied to Sindh.”

The spokesperson said IRSA had supplied 700,000 acre feet water to Sindh so far from Mangla Dam.

“Sindh has also discharged 46,000 acre feet of water into the sea so far,” he added.

Rana said IRSA had no role in supplying water to Karachi and this was an internal matter of the province.

He maintained that 2.5 million acres feet of water had been provided to Sindh so far in Kharif season.

“There is no dispute over Chashma Jhelum Link and Taunsa Panjnad Link canals,” he claimed.

“Punjab drew its share of water from these canals with the permission of IRSA. It’s a purely technical matter, which is being politicised.”(With input from APP)