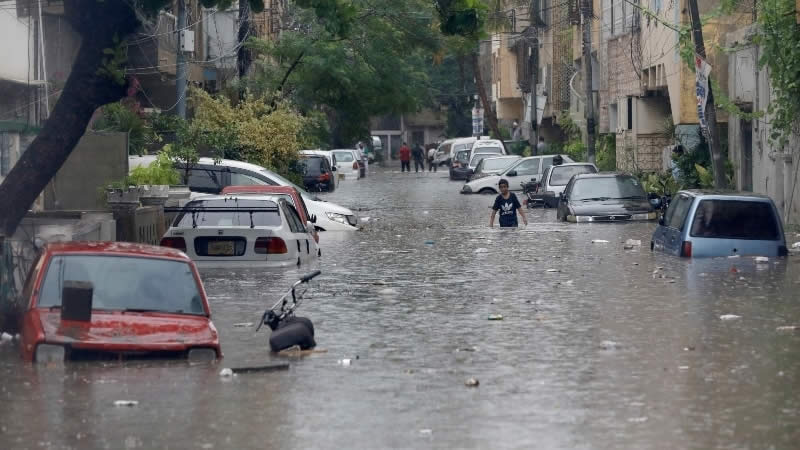 At least six persons, including women and children, die in wall collapse after being struck by lightning

At least 18 people were killed in rain-related incidents, including drowning, structural collapse, electrocution and other mishaps, in Karachi on Thursday.

At least six persons, including women and children, died when a wall collapsed after being struck by lightning in Gulshan-e-Iqbal.

Raeed Alam, an area resident, told The Express Tribune that the wall collapsed suddenly near Saima Square apartments. “Several children were playing near the wall,” he said, adding that the wall had been struck by lightning. The situation across the city is so terrible that rescue workers could not arrive right away.”

Area police stated that at least six bodies were retrieved from the debris.

In another incident, a 42-year-old woman, Nusrat, drowned at her residence in PECHS. The deceased was a differently-abled woman in a wheelchair.

A 13-year-old boy also died when he was electrocuted in Punjab Colony, while a young man was electrocuted to death in Rehri Goth on Thursday morning. The deceased could not immediately be identified but appeared to be around 25 years old. Another man, Omer Hayat, 26, died of an electric shock on the rooftop of a building in Defence Housing Authority.

Meanwhile, a youth died after falling from a rooftop in Ranchore Lines. The family of the deceased, identified as 20-year-old Ali, informed authorities that he lost his balance and fell while draining water from the rooftop.

Moreover, Edhi rescue workers recovered the body of a teenage boy who had drowned in a stream near the Super Highway the previous day. According to rescue workers, he was identified as Imran, 18.

A man, identified as 45-year-old Syed Mohammad Ali, was killed when his motorcycle slipped near Defence Morr.

Separately, Akram, 40, who was travelling on the roof of a bus, fell off and died when the bus driver applied emergency brakes.

CM Murad through different reports submitted to him by deputy commissioners learnt that some people living in the bed of Sukkan and Malir rivers have stranded due to high flooding in them. He directed commissioner Karachi to request Pak Navy and Army to rescue the stranded people from the rivers and house them in school building in Malir district.

The chief minister also directed the Provincial Disaster Management Authority (PDMA) to arrange food, and other necessary staff for them and their children.

He directed the PDMA to arrange tents, dry food items and drinking water for the people to be shifted to camps.

The city, still recovering from record rainfall on Tuesday, is again being battered by strong monsoon spell. The rainfall on August 25 broke the record for the highest amount of rain during the month of August since 1931.

The barely-there drainage of the metropolis gets overwhelmed during heavy rain spells and inundates low-lying areas and roads, causing severe distress to the citizens of Pakistan’s highest tax-paying city.

‘Never rained so much in August’

“It has never rained so much in the month of August, according to our data,” the country’s chief meteorological officer, Sardar Sarfaraz, told Reuters, adding that the data went back to 1931, 16 years before Pakistan gained independence from Britain.

“Our exports consignments are being delayed and hence our exports for the month of August may be affected,” Dawood said on Twitter.

Meanwhile, the rescue and relief operation by the Pakistan Navy in different affected areas in Karachi is continuing.

According to a spokesman of Pakistan Navy, the emergency response and rescue teams of Navy evacuated stranded people to safer places and recovered bodies being washed away in flash flood.

“These teams in collaboration with the civil administration having boats and other required lifesaving equipment have been deployed in different areas of the city including Diamond City Malir, Shah Faisal Town, Korangi Crossing, Sammo Goth and Bahria Town Karachi,” he added.

Ration bags and cooked meal were also dropped in various areas for the affected people.

According to the Rangers spokesperson, the Rangers have constituted separate teams for relief and rescue work to carry out the operation in a faster manner while reserve teams are also present in various areas to deal with any kind of emergency.

“Rations are also being distributed in the areas where food supply is low with the help of philanthropists,” he added.

Rangers have asked the people to contact Rangers helpline 1101, Rangers check post or whatsapp number 0347-9001111 for immediate assistance regarding rescue or relief.

Earlier inthe day, the heavy rainfall was also resulting in massive traffic jams in parts of the city due to flooded roads.

The commuters travelling to Korangi district are facing problems due to massive digestion of traffic at the Jam Sadiq Bridge and Qayyumabad. People are also stranded at the road in the rain.

The traffic police have advised the commuters to avoid driving the wrong side as this will make the situation worse.