Celebrities lament the havoc caused by Rainfall in Karachi 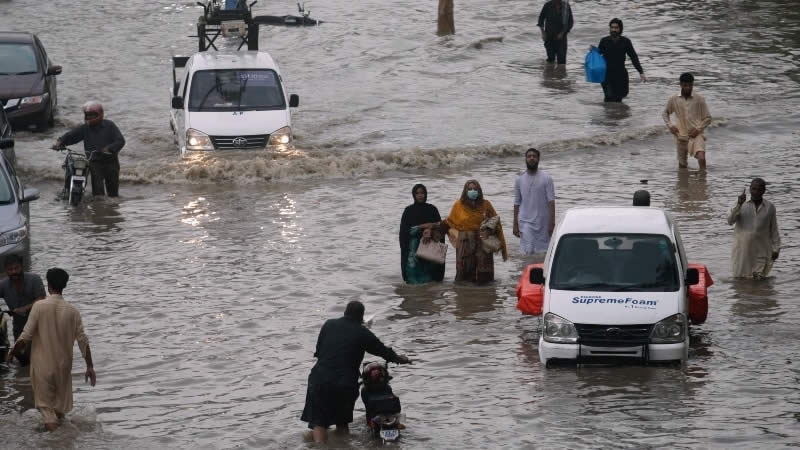 Karachi had one of the most devastating monsoon spells this year. The city was caught unprepared once again on Tuesday, as the monsoon downpour caused many to draw comparisons between its roads and Venice’s canals.

Actor Yasir Hussain in an Instagram story, wrote “Karachi ko sub ney mil kar barbad kia hai. Haseen shehar hai yeh, kachra daan banadia ( Everyone has ruined Karachi together. It was a beautiful city that has been made into a garbage dump ).”

Cricketing star, Shahid Afridi pointed out how the city has been deteriorating since his childhood. “We also saw this city being destroyed like this in our childhood and it is a shame that now our children are also witnessing its destruction! Regardless of political affiliations, the country’s largest and most revenue-generating city has proved to be the administration’s biggest failure,” he said.

Adding on, he said, “Wish we could learn from any metropolitan city in the world, which has created artificial lakes. Is it our fault that we chose this city to live in; we pay taxes here but what responsibility does the administration fulfill in return? Who will catch the culprits who make Karachi garbage?”

Social activist Shaniera Akram tweeted a clip of the streets flooded with water. Alongside the clip she wrote, “Electrocution, drowning, irreversible damage to property, poisoning, cross-contamination, hepatitis, dysentery, typhoid, risk of the polio outbreak, not to mention the diseases associated with mosquito infestation like dengue and malaria! How is Karachi not in a state of emergency?”

Television personality Fakhar e Alam talked about how the city, despite being the largest has been ignored repeatedly by the powers that be. “Karachi has been in a state of denial….it baffles everyone that the country’s largest city has only regressed over time. I say this with no political bias just as a citizen. It is almost like people of Karachi have been abandoned,” he tweeted.

Writer and activist, Fatima Bhutto also expressed disappointment over the government’s inability to tackle the situation on a repeated occasions. “ If monsoons happen every single year at the SAME time, what possible excuse can the government have for never being prepared?”

Meanwhile RJ and actor Ali Safina took the opportunity to laud those citizens that stepped up to help those around them.” Instead of complaining, let’s all spread some positivity. Big salute to all the karachites who have been helping people stuck on the roads, helping people reach safely to their loved ones. People who aren’t doing it because it’s their job but because they care,” he wrote on Twitter.