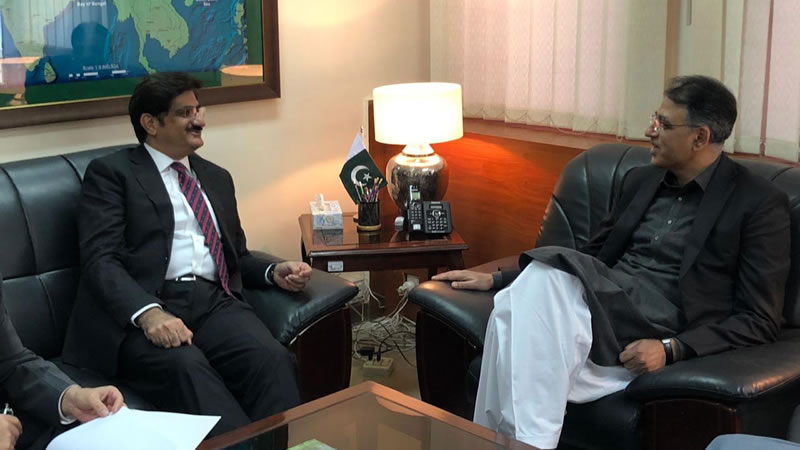 Leaders of the Pakistan Peoples Party, Pakistan Tehreek-i-Insaf and Muttahida Qaumi Movement-Pakistan on Wednesday met for the third time in a short span of one week and decided to form a coordination committee for collaboration between the federal and Sindh governments in six areas for the betterment of Karachi.

However, the PPP-led Sindh government claimed that the coordination committee was for the entire province and not for Karachi alone.

First two meetings between the three parties were held in Islamabad and Karachi, respectively, in the presence of a senior member of the security establishment, which is very much concerned over the state of affairs in the provincial metropolis and wanted all stakeholders to find out a solution to the problems of Pakistan’s commercial hub.

“We have serious political difference with the Sindh government but we will work together with it for the development of the city which generates most of the revenue of the country,” Planning and Development Minister Asad Umar told a press conference in Islamabad after meeting Sindh Chief Minister Syed Murad Ali Shah and his team.

Mr Umar said a six-member committee had been formed and it would not be headed by anyone and both sides would work on a mutual understanding. The committee would start its work from Thursday (tomorrow) and next meeting would be held in Karachi on Saturday, he added.

He said the federal and Sindh governments reached a consensus for the development of Karachi and identified six areas for collaboration.

He said it was decided in the meeting that all bottlenecks in the long-standing projects such as Karachi Circular Railway, K-IV water project and Greater Karachi Sewerage Project S-III would be removed through mutual consultations.

The planning minister made it clear that there would be no compromise on the accountability process in the country in the name of development.

Earlier in the day, the Sindh chief minister along with provincial ministers Nasir Shah and Saeed Ghani flew to Islamabad to hold a meeting with PTI and MQM ministers Asad Umar, Ali Zaidi and Aminul Haque.

A spokesperson for the Sindh CM said National Disaster Management Authority (NDMA) chairman Lt Gen Mohammad Afzal — who was present in the Karachi huddle — also participated in the meeting. He said the meeting had decided to form a coordination committee. “The committee between the federal and provincial governments would coordinate on [development] projects in Sindh,” he said, without even mentioning Karachi.

Sources said that in Wednesday’s meeting, the PPP side was of the view that it would be better for it if the people viewed the committee as apolitical and purely a government body. The PPP, the sources said, also wanted the committee to cover the whole province instead of Karachi as its voters would consider a body only for Karachi as a federal move to encroach upon provincial government’s powers and as a step to separate Karachi from the rest of Sindh.

Prior to Wednesday’s meeting, the three parties met in Karachi on Aug 15 in the presence of a senior member of the security establishment. After that meeting, provincial government’s spokesperson Murtaza Wahab told the media that a committee to be headed by Chief Minister Shah was being formed on Karachi, with federal ministers Asad Umar and Ali Zaidi of the PTI, Aminul Haque of the MQM-P and provincial ministers Nasir Shah and Saeed Ghani as its members.

But in a matter of a few hours, Sindh Information Minister Nasir Shah came up with a statement declaring that no decision was taken regarding the formation of any committee and that development works in the city was the responsibility of the provincial government.

Later, CM Shah also repeated the same thing, but added that the formation of the committee came under discussion during the meeting.

On Tuesday, CM Shah told reporters in Sukkur that only representatives of the federal and provincial governments, and not leaders of any political party, would be part of the committee to sort out the issues of Karachi and it would work for the removal of all hurdles in the way of development works.

The PPP on Wednesday staged protest demonstrations in Karachi and Islamabad against the PTI-led government’s ‘intention’ to separate Karachi from Sindh and warned that it could launch an MRD-like movement if conspiracies were not stopped.

The protests were held outside the Karachi Press Club and the National Press Club, Islamabad, in which senior party leaders and scores of workers participated.

They said the “Niazi government” could not blackmail the PPP as neither the federal government nor anyone else had the authority to divide Sindh.

They said Sindh was the province which passed the resolution for Pakistan first and only it could save Pakistan. No effort to divide Sindh would be tolerated. The federal government was conspiring to dismember the country, the PPP leaders alleged.