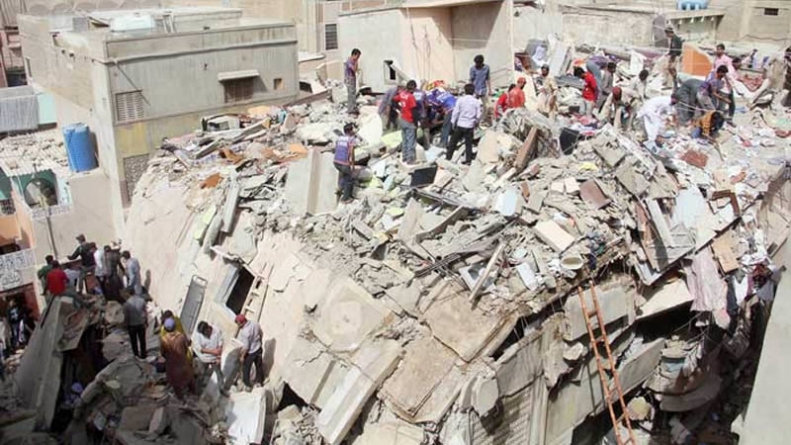 Two women’s bodies have been pulled out from under the debris and 12 peopel have sustained injured in the incident, according to rescue workers.

The building was constructed on 400-square yard plot. An adjoining five-storey building was also damaged in the collapse.

Another resident said that some families had left the building minutes before it collapsed. The area plunged into darkness as electricity went out soon after the incident.

Karachi Mayor Wasim Akhtar said the building control authority has a list of old buildings in the city and has repeatedly asked them to evacuate them.

He said the city government’s fire and rescue departments were working in the area.

Nasir Hussain Shah, the Sindh information minister, said that the government has instructed all the departments to help the rescue workers and provide medical aid to injured. He and Education Minister Saeed Ghani visited the site.

The police, Rangers and Pakistan Army are at the scene to help with the rescue process.

Sindh Chief Minister Murad Ali Shah has taken notice of the accident and Governor Imran Ismail has summoned a report on the incident.

The SBCA’s Technical Committee on Dangerous Buildings Secretary Benish Shabbir told SAMAA Digital that the building was 25 to 30 years old and had already been declared “dangerous” by the SBCA six months ago.

SBCA Spokesperson Ali Mehdi Kazmi informed SAMAA Digital that eviction notices had been issued to the occupants of this collapsed building on March 18. The notices gave them 15 days to leave the building.

The SBCA spokesperson confirmed that the electricity and gas connections were disconnected a month and a half ago but the tenants were still living in the building and had arranged illegal electricity connections.

He said both residential buildings were declared dangerous some six months ago, as visible cracks were emerged in the structures.

Twelve hours after the incident, the rescue operation is still under way. But residents are upset at the slow pace of the operation. They say those who survived the collapse and are stuck beneath the rubble may not be able to hold on for so long.

This was the third building collapse in Karachi in the past four months.

The first building collapsed in March in Rizvia Colony. It was a five-storey illegal residential building constructed on an 80-square-yard plot. Around 25 people died in the incident.