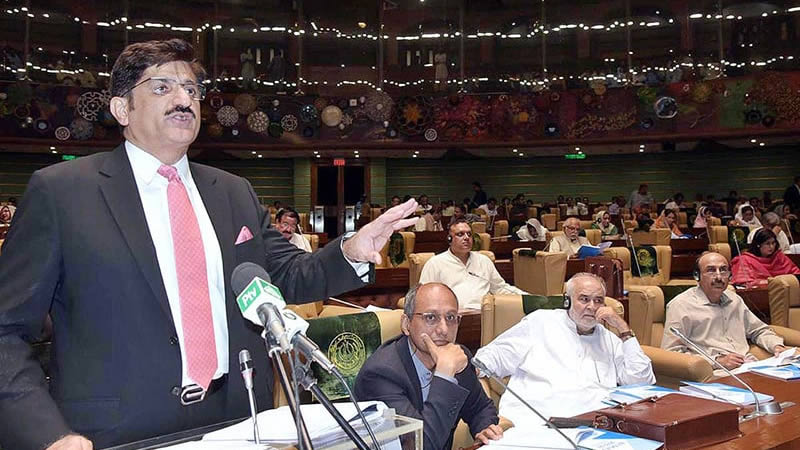 The government of Sindh has allocated Rs2.7 billion to set up new hospitals, as well as to expand the intensive care units (ICUs) and high-dependency unit (HDUs) as part of its coronavirus response effort, according to a press release issued Wednesday.

In a meeting at the Chief Minister House in Karachi, Chief Minister Murad Ali Shah directed the provincial health department to make at least 500 monitors and 200 ventilators available in Sindh, as well as ensure the completion of a 50-bed hospital in Gulistan-e-Jauhar and 200-bed infection disease control hospital at NIPA, latest by June 2020.

“We have arranged Rs2.7 billion to upgrade the existing facilities and operationalise two new hospitals in the city. Hopefully, [with this], the government would be able to accommodate a large number of patients, in case of a further spread of [the] pandemic.”
Capacity improvement across Sindh

Shah was also apprised of the establishment of 131-bed ICUs and 174-bed HDUs in 10 different hospitals in the city. However, 61 beds in the ICUs and nine in the HDUs were vacant at present.

In response to a question, he was informed that 30 monitors and six new ventilators have been provided to the Dr Ruth K. M. Pfau Civil Hospital.

Shah was told that while the structure of a 50-bed hospital across Karachi University was ready, work on its oxygen pipeline would be completed by the end of the current week.

He gave four to six weeks to the Sindh health department to ensure the hospital was functional.

Shah was also apprised of the developments pertaining to the three-story, 200-bed Infection Disease Control Hospital in NIPA, which would have high-flow oxygen and an ICU. While its structure was ready, necessary installations are ongoing.

In this regard, the chief minister directed the provincial health department to ensure that the 54-bed ground and first floors were functional within the next five weeks.

The private hospitals were directed to expand their ICUs and HDUs as per the Sindh government’s request.

Meanwhile, local transmission cases of the novel coronavirus rose by 699, bumping up the provincial tally to 24,206. The chief minister said that six more people had died of the virus, taking the total death toll to 380, or 1.6% of the total patients.

CM Shah said the new cases were diagnosed after 2,177 tests were conducted over the past 24 hours. This, he added, translated to almost 31%, “which is comparatively higher”.

Some 755 patients recovered, taking the total number of recoveries to 9,270 and translating to a 38.3% recovery rate.

At least 24 new cases were diagnosed in Ghotki, 11 in Sukkur, 10 in Larkana, seven in Mirpurkhas, six each in Jacobabad and Badin, five in Hyderabad, three in Jamshoro, four in Shikarpur, two each in Khairpur and Thatta, and one each in Dadu, Qambar Shahdadkot, Shaheed Benazirabad, and Tando Muhammad Khan.

The chief minister, once again, urged the people of Sindh to stay home, observe self-isolation, and not crowd the markets. Otherwise, controlling the coronavirus would not be possible.