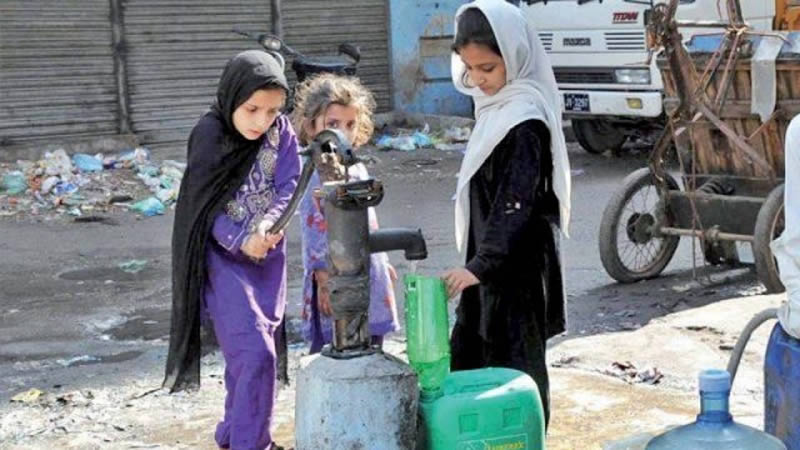 A week into Ramazan, with early summer temperatures soaring up to 37 degrees Celsius, hundreds and thousands of Karachi’s residents have once again been forced to rely on expensive water tanker services as taps across the city start running dry.

Although the decrease in commercial and industrial use of water during the extended lockdown may have alleviated issues in a few residential areas of the city, the majority of Karachi continues to toil with a growing water crisis, owing to the water board’s weak distribution system and leaky pipelines.

The state of injustice is such that where certain areas get a daily supply of water, others less fortunate have to wait from a week to a month’s time for their share to flow. However, due to broken valve operation systems and water theft, the crisis is most felt by those living furthest from the main supply lines, where water can be especially scarce.

A Karachi Water and Sewerage Board (KWSB) engineer speaking on conditions of anonymity, revealed that the local distribution system of the water board has failed and has been functioning on rotten lines for a while.

“The biggest reason for the crisis is that the city is not being supplied with water in accordance to its massive population. The population of Karachi has reached 25 million according to which the city needs over 1,200 million gallons a day (MGD) of water, yet the combined supply from the Indus River and Hub Dam is only 550 MGD. In addition to that, water is also lost due to leakage and theft from illegal connections, further reducing the supply to just 420 MGD,” the engineer explained.

As per reports available with The Express Tribune, water supply in different blocks of Gulistan-e-Jauhar, Gulshan-e-Iqbal, North Nazimabad and Gulberg has improved during the lockdown, while some improvements have also been made in Baldia Town and Orangi Town. In addition to that, water pressure has also improved in other areas, but those living at the tail end of the supply lines continue to suffer.

Similarly, areas with faulty supply lines or those where the valve operation system is non-existent, such as some blocks of Gulshan-e-Iqbal, North Karachi and several sectors of New Karachi, are also suffering from a growing water crisis.

Central district chairperson Rehan Hashmi told The Express Tribune that only 60 per cent of the water demand is being supplied to the city, while the remaining 40 per cent of the district’s population did not get its share of water, mainly due to leakage and water theft. “The leaking lines have also damaged many roads in these areas while water has not been supplied to various streets in these areas for many years.”

On the other hand, according to a KWSB spokesperson, special monitoring of valve operation and pumping stations is being carried out and water is being provided on a fair basis.

“The supply has improved in many areas due to the lockdown. That is why the number of complaints is low these days, while all existing complaints have been resolved as well. Other than that, the lines are being repaired for leaks,” asserted the spokesperson. “Owing to the lockdown, the water board has terminated commercial water tanker services while public water tankers are being increased and made available at government-approved rates to ease the troubles of the citizens too.”