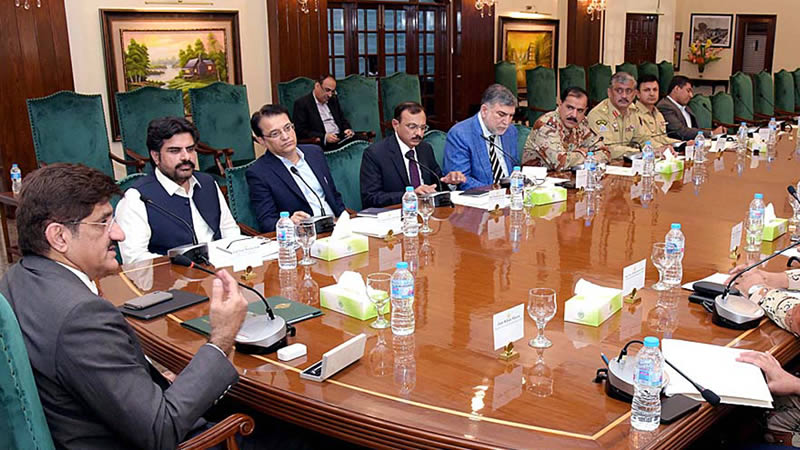 With the emergence of coronavirus patients from a katchi abadi among the 92 cases reported in the province on Thursday, Sindh Chief Minister Syed Murad Ali Shah expressed deep worry, claiming that the Sindh government wanted to extend the lockdown by a week.

Separately, in a video message, the CM implied that with social distancing near impossible in informal settlements such as the one in Karachi’s Central district where seven members of a family tested positive for COVID-19, the development would only steepen the already sharp curve of the pandemic.
He said, “I was afraid of the day when the virus will start spreading in slum areas as people in these settlements live in small houses with large families,” adding that his fear had come true. “The head of the family went outside, contracted the virus and infected the rest of the family, including his one-year-old son and six-year-old daughter,” the CM revealed.

He lamented that despite Sindh government’s “serious efforts and strict policy for containing the virus,” the contagion had penetrated into slum areas as the residents failed to maintain social distance, as advised by experts.

Keeping in view this development, the CM urged citizens to avoid crowding places during the distribution of cash and ration, warning that otherwise they “will [likely] carry the virus back home and infect their families.”
Lockdown

Speaking with respect to lifting the lockdown, the CM hinted that it would not be lifted at once but eased off in phases. And when and as it would happen, “post-lockdown life will not be the same,” he maintained, adding that people would have to be particularly careful about their own, their family’s and others’ wellbeing.

“The government will issue new standard operating procedures (SOPs) for every sector in the post-lockdown period,” he further said, asserting that abiding by those guidelines, all business centres, factories and shopping malls would have to adopt preventive measures.

“We are not living on an island but in places frequented by people from other cities, provinces and countries, to which we travel as well, and therefore, social distancing is the only way to keep ourselves safe and secure,” he remarked.

The CM also clarified that the news of three people dying of hunger in Sindh was “incorrect and not based on facts.”

One of the deceased had, in fact, set himself on fire in Jhatpat, Balochistan over a domestic dispute, the CM claimed, adding that he was then admitted to Hira Medical Centre in Sukkur and later shifted to Pir Abdul Qadir Shah Institute of Medical Science in Gambat, where he succumbed to his burn injuries.

He further said that another of the three deceased belonged to a well-off family of Gambat and was the son of a schoolteacher. He, too, set himself on fire over a domestic dispute, according to the CM.

Meanwhile, Riaz Metlo, 55, a resident of Khairpur, had been sick for the past 15 days and died a natural death, he stated, talking about the third deceased.

“I am again emphasising that we are in the middle of an unprecedented crisis and at this juncture, printing baseless stories and spreading rumours should be avoided as it will achieve nothing but increase chaos and panic,” he stressed.

Giving updates on the virus tally in Sindh, the CM said that 92 more cases were reported as of Thursday morning and the infection had claimed one more life.

According to the details shared by the CM, the Sindh government had tested 11,623 people for the coronavirus, of whom 1,128 tested positive, and as of now, 436 people are isolated at their homes, 59 in isolation centres and 263 in different hospitals. The COVID-19 death toll in Sindh has reached 21.

He further revealed that of the 280 pilgrims from Iran who had tested positive for the virus, 242 had recovered and were sent back home.