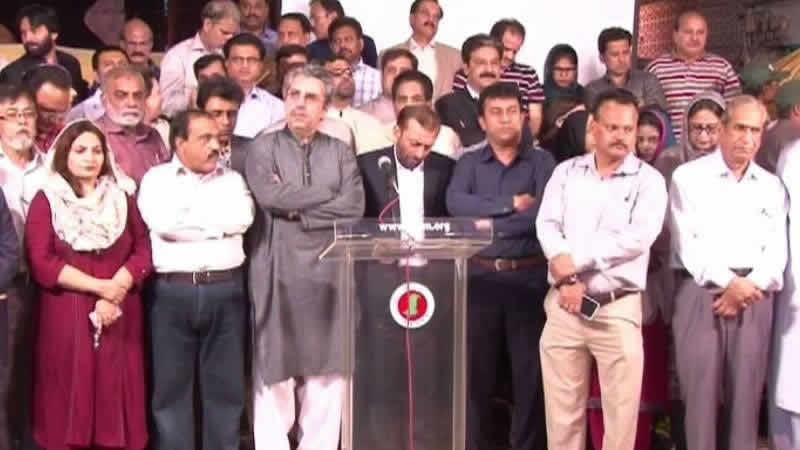 terming allegations leveled by Mustafa Kamal and Anees Qaimkhani against Altaf Hussain as ‘an insult to the intelligence of those who vote for the party.’

“The return of Mustafa Kamal and Anees Qaimkhani is part of a conspiracy but MQM stands by Altaf Hussain,” said party leader Farooq Sattar. He said similar allegations were levelled against MQM during last year’s NA-246 by-polls. “But people voted in our favour which implies that the people of Karachi, regardless of their religion, sect and class, stand with Altaf Hussain and the MQM,” claimed Sattar. He advised Kamal to support Wasim Akhter, the elected mayor, and help Akhter during his work with his experience if “he truly sympathises with the people of Karachi”.

Speaking via telephone from London, Rabita Committee convener Nadeem Nusrat lashed out at the media for making “an issue out of a non-issue.” “Media gave hours of air time to people with no mandate,” complained Nadeem Nusrat. He said the party does not need to clarify itself because the “people’s court has always issued its verdict in favour of MQM.” “On one hand the MQM chief is not allowed to appear on media, but the same media airs baseless allegations against Altaf Hussain”, maintained Nusrat.

“I will ask the establishment to stop this media blackout because no one else but only Altaf Hussain is the solution to these problems,” said Nusrat. “Altaf Hussain is the only genuine leader in Pakistan, who is sincere to Pakistan’s cause and its people.” Nusrat said those who oppose Altaf Hussain are treated as heroes. “But people like me, who still stand with the MQM chief are termed criminals.” “My message is clear, don’t pay heed to any Tom, Dick or Harry.

True leadership lies with Altaf Hussain,” said Nusrat. Earlier today, MQM leader Barrister Saif said a press conference by two people does not affect MQM and its chief Altaf Hussain in any way, terming Mustafa Kamal’s allegations as baseless. “My party and I stand with Altaf Hussain. The allegations levelled by Kamal do not concern us and have little value,” said Saif while talking to Geo News. MQM lawmaker Syed Ali Raza Abidi also slammed his former colleagues – Kamal and Anees Qaimkhani – saying the presser reeked more of a “hurt ego” than any “substance”.

Pakistan Pledges To Work For Easing Tension In South Asia